European carriers continued to trend lower on Thursday (19-Apr-2010) as carriers reported losses for 1Q2010 and continued to estimate the costs due to this week's closure of European airspace. Airline shares also followed the wider markets, which slumped due to Greek deficit issues, including a downgrade of the country’s bonds and a lower than expected deficit.

In key markets, UK’s FTSE (-1.0%) and France’s CAC (-1.3%) both ended the session lower. Germany's DAX (-1.0%) was also down. The country’s Leading Economic Index for Feb-2010 remained unchanged, with the recent behavior of the composite indexes "suggesting that economic activity should continue expanding, but probably not very rapidly, in the near term," according to the The Conference Board.

President and CEO, Mats Jansson, stated he expects 2010 to continue to be a “tough year” for the airline industry, but there have been some signs of improving demand. However, he added “uncertainty still remains regarding yield development”.

The carrier also stated during trading that it lost SEK630 million (approximately USD60 million) due to the Ash Attack traffic disruptions.

The carrier stated it anticipates capacity (ASK) growth of approximately 30%, mainly from increasing its fleet through the addition of B737-800s. Norwegian may decide to adjust capacity deployment depending on developments in the overall economy and in the marketplace. The Danish operation had a total fleet of seven aircraft at the beginning of 2Q2010. The routes have been well received in the market, but are experiencing some pressure on yield from increased competition.

Cimber Sterling shares (+1.4%) gained as a result of SAS and Norwegian’s losses. The only other carrier to witness an improvement in shares on Thursday was easyJet (+0.8%).

Vueling expecting merger synergies to be completed this year

Vueling (-1.3%) was also down after it reported a net loss of EUR6.3 million, compared to the same loss of EUR6.3 million in the previous corresponding period. This was despite a 90% year-on-year rise in revenue, to EUR141.8 million (following the clickair merger). Total costs rose 84% for the quarter, to EUR154.8 million.

Vueling stated that despite the negative effect of the volcanic ash cloud in 2Q2010, the carrier maintains its guidance for an improved net profit in 2010. The carrier expects a "high degree of competitive intensity" during the quarter. The reduction of CASK ex-fuel to EUR 4.00 cents remains one of the main objectives for 2010, despite expecting a rise in fuel costs in 2Q2010.

In addition, Vueling expects cash levels to significantly increase in 2010 and merger synergies to be completed, including revenue of EUR20 million and costs of EUR15.5 million.

Aeroflot (-0.9%) shares slipped, despite reaching an aviation assets transfer agreement with Russian Technologies Corporation (RTC), according to RTC General Director, Sergei Chemezov. Mr Chemezov also indicated that the aviation assets would be transferred into management only for the time being, as some of Aeroflot's shareholders have expressed opposition to the agreement. Under the agreement, Aeroflot will enable RTC to purchase aviation equipment and spare parts for the airline, as well as provide maintenance services. One of RTC representatives is expected to be elected to Aeroflot's Board of Directors.

Elsewhere, Dart Group (-3.8%) and British Airways (-3.4%) were both down. The carriers stated the day prior they estimated losses from disruption of services to total GBP15-20 million and GBP2.8 million, respectively. 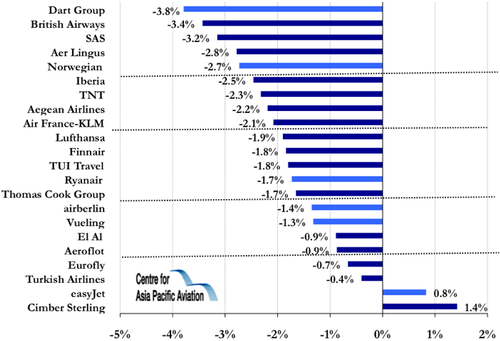