In doing so, Norwegian has eclipsed 50% of SAS’ monthly passenger volume. Norwegian’s shares soared 9.8% higher on Friday as yields fell (only) 10% year-on-year (following a 19% fall the previous month). Norwegian’s RPK rose 34% in Oct-2010 as its average stage length continues to grow.

SAS Group’s RPKs rose 8.2% as it grew capacity (ASKs) by 6.5%, resulting in a 1.2 ppts increase in passenger load factor to a new October record 75.5%. SAS expects yields to remain under pressure (it has a one month delay in releasing yield figures). SAS’ Sep-2010 yields fell 5%, while RASK was flat.

SAS concluded: “The market continues to improve but is still unpredictable particularly regarding the yield development due to overcapacity on certain markets. A recovery has been noted on both intercontinental routes and certain short haul Business routes. SAS has as a result initiated yield enhancing measures to offset the negative yield development and the implementation of the cost saving program is on track”.

Elsewhere in Europe, Cimber Sterling advanced 4.6%, while Ryanair and easyJet fell 1.1% and 1.4%, respectively. 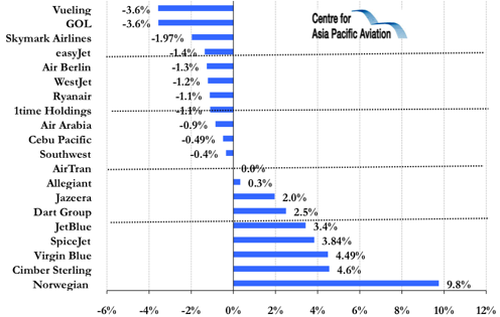