Norwegian Air Shuttle’s shares gained 5.6% yesterday, outpacing its LCC peers in the European market, and peaking at a five-month high, as the carrier reported a 30% increase in passenger numbers, to 1.0 million in the month.

The increase in passenger numbers, traffic (RPKs up 38%) and capacity (ASKs up 34%), was related to the Group’s expansion in established markets and to the introduction of new routes from Apr-2009 to Mar-2010, as well as adjustments to production capacity.

Also during the month, the LCC reported an 11% year-on-year reduction in yield and an 8% reduction in revenue per ASK (RASK). The yield profile reflected an adjusted route portfolio and the introduction of new aircraft with higher capacity and lower unit cost. Norwegian stated the yield reduction was also partially offset by load factor increases (+3 ppts to 78%) in the month. The year-on-year yield and load factor development was, however, positively affected by the Easter holiday.

In the 12 months to Mar-2010, easyJet handled a notable 19.3 million fewer passengers than Ryanair (which handled 66.5 million, compared to easyJet’s 47.2 million). However, easyJet’s load factor in the 12-month period was 7.4 ppts higher than Ryanair’s. Ryanair’s shares gained 1.4% yesterday. 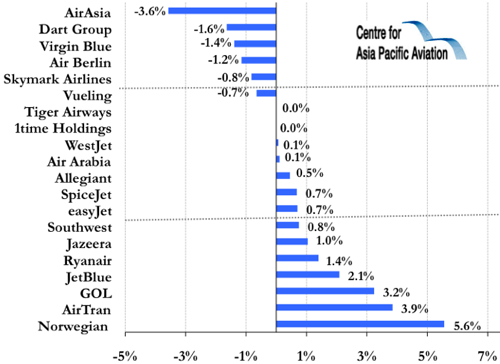