Despite the continued growth of other gateways on both sides of the Atlantic, New York and London continue to be the two endpoints most frequently appearing on the list of top North Atlantic routes. In an ongoing review of the world’s top routes by region as taken from CAPA's new Routes Rankings tool, we next look at the most established international sector - the North Atlantic.

In the post WWII period virtually every European carrier entered the fray; contending with the American duo of TWA and Pan Am. For many years the services to New York were each airline’s “flagship” route and despite the continual increase of flights to alternative cities, New York and London continue to hold their own.

London, Paris and Frankfurt dominate the European side of the Atlantic air market

London, followed by Paris and Frankfurt, are the origins or destinations for a great many North Atlantic travelers. It is no surprise as these three airports correspond to anchor points for each of the global alliances. Nonetheless, despite the substantial service at Paris CDG and Frankfurt, Heathrow appears as often as those two combined.

On the European end, the end points are far fewer in number than the corresponding list in the US and Canada, with only six airports represented in the top 25 routes. 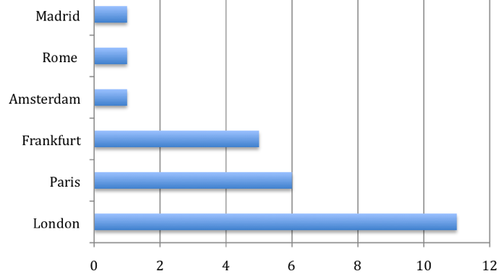 However, at the other end, the list is longer and far more diverse, represented by 14 airports - some, but not all - US carrier hubs. Again it is the prevalence of flights to London that put many of those North American cities in the top group. And that is true irrespective of alliance affiliation. 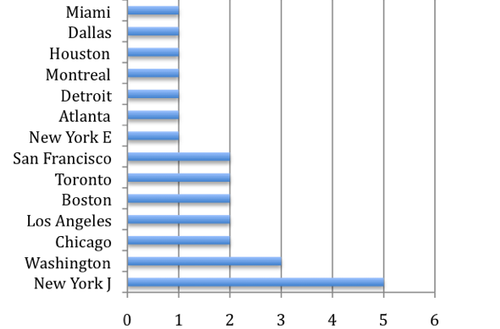 Cities like Houston and Newark, both dominated by Continental, still allot the largest number of North Atlantic seats to London where Star has a minimal presence.

A slightly different pattern with frequencies

The picture changes slightly when frequency, rather than seats, is the measure. Aircraft size plays a more prominent role. Frankfurt-Washington has more operations but with Lufthansa operating an A380 to New York, fewer flights still yield more seats.

And despite ranking 16th in number of seats, Frankfurt-San Francisco falls off the frequency list, its spot filled by 25 frequencies between New York and Zurich. The difference is again accounted by the operation of an A380 to SFO. 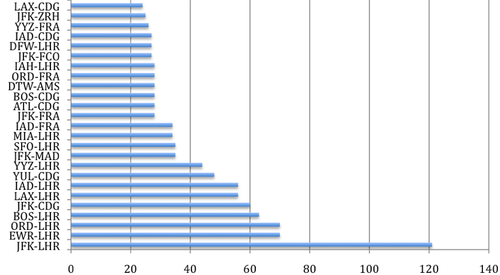 Because of the predominance of London, New York and to a much lesser extent other hubs of ORD, LAX, MIA and DFW, oneworld has the greatest number of hub-to-hub connections in this group of 25 city pairs, holding half of the 14 sectors that link hubs. 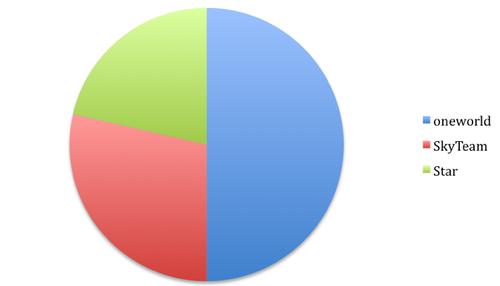 There are few surprises here. For decades the UK has held roughly a 40% share of the North Atlantic market and the predominance of London seats confirms that its position on top remains presently secure.

The British government is contributing to the country's long-term decline

However, the (likely to escalate) Air Passenger Duty charges, coupled with an airport (Heathrow) that is full to the brim, could, over time, divert more connections to airports on the Continent that offer more capacity for expansion. Both CDG and FRA have the ability to add more service and will doubtless exploit that advantage over time.

While long-haul airlines like Singapore and Qantas upscale routes with larger aircraft on their services, the opposite is true on the North Atlantic. New York and Boston have seen many flights downgraded to B757s, but with increased frequency.

In reality, the North Atlantic, as the oldest and most established intercontinental route, will probably not show appreciable change in the medium term. In general, the US carriers have few double-aisle aircraft in their order books and the B787s and B777-300s to be delivered are already targeted for new long, thin services or to add capacity on longer segments, many in Asia.

The one possible spoiler in the market is the oft-heard threat of low cost competition; an ever more possible event due to the increased range of single-aisle aircraft. However, despite the increased technical feasibility, no airline has displayed the will to move in that direction - yet.