North Asian airlines up on rumours of Chinese government support

In China there is now more daily talk of injections than you would hear in a doctor's surgery. This helped drive Air China stock upwards yesterday by a whopping 19.9%.

Although markets in the region were generally well up on the day, it looks as if a lot of the support that North Asian airline stocks received yesterday was related to that talk of Chinese government financial support for its major airlines - an indication of the growing importance of the Chinese market to those around it.

Air China, likely to be the prime beneficiary of any central government generosity, was the highest riser, but most of the other airlines in the locality showed good increases, from Cathay (+6.5%) to Shanghai Airlines (+7.3%).

Qantas meanwhile, appeared to have benefited from its CEO apparently distancing himself from the proposed British Airways merger, by playing down its likelihood of overcoming commercial and regulatory barriers. As the Australian S&P/ASX 200 rose 4.1% on light trading, Qantas showed a 7.2% gain.

AirAsia shed some of its gains of yesterday, the only seriously negative mover, down 5.2%. 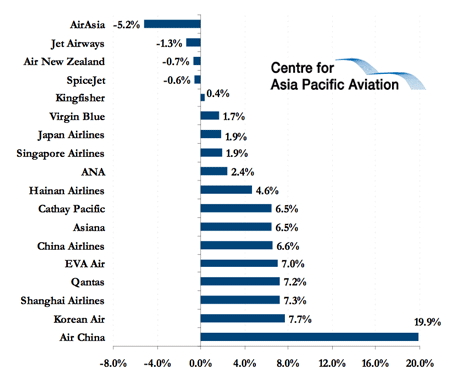