No recovery in Hong Kong cargo traffic yet

Export tonnage reduced by approximately 25%, as key markets such as North America, Southeast Asia and Taiwan registered a significant yearly decline of over 30%. Imports also dropped around 17%, while transshipments fell around 9% year-on-year. 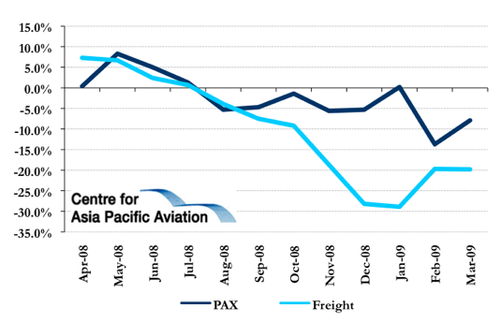 AAHK stated that travel by Hong Kong residents experienced a yearly decline of 15% during March, mainly due to the busy outbound travel period around the Easter Holidays falling in April this year as opposed to March in 2008. Visitor traffic to/from Hong Kong also dropped 9% as the economic downturn continued to affect business and leisure travel. Long-haul markets such as North America and Europe, as well as regional markets including North Asia and Taiwan, were hit hardest, according to AAHK

CEO, Stanley Hui, remained relatively upbeat, stating, “while the duration or full impact of the current recession remains to be seen, we are confident that its impact on traffic at HKIA will gradually lessen and the long-term prospect of HKIA stays positive”. He added, “we will keep investing in our software and hardware to ensure HKIA will be in a position to meet demand when the market eventually recovers, and has enough capacity to meet long-term aviation demand and provides a level of service that will continue to set global standard."