No improvement in sight as yields continue to fall, freight remains at “shockingly low levels", IATA

IATA’s Director General and CEO, Giovanni Bisignani, has warned industry stakeholders against complacency as international passenger demand staged a minor comeback in April. Mr Bisignani stated the demand improvements in April are “welcome, [but] we are not out of the woods yet”. He added there was no improvement in revenues as yields continue to fall, while freight markets remain at “shockingly low levels”. Mr Bisignani concluded, “the worst may be over, however we have not yet seen any signs that recovery is imminent”.

Passenger demand decline slows, but no recovery in sight

The average passenger load factor eased to 74.4%, as the decline in demand still outstripped the 2.5% cutback in industry capacity. IATA stated the improvement (compared to March) should be viewed with caution as the Easter holidays, positively skewed the data by at least 2%.

More importantly, traffic gains “were at the expense of yields” in most regions, according to IATA, while preliminary data for May “suggests a renewed double digit decline, at least for European airlines”.

Asia Pacific carriers continued to see the most significant demand deterioration, in both passenger and cargo segments. Their 8.6% fall in RPKs last month outstripped capacity adjustments of -7.4%. Middle Eastern carriers again saw the strongest demand growth in April of 11.2%, against a capacity expansion of 12.3%.

IATA airlines RPK growth by region: May-08 to Apr-09 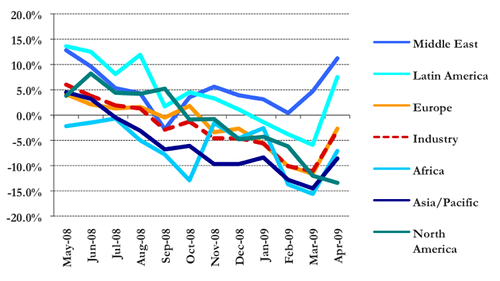 IATA noted an acceleration of fare discounting saw demand increase on North Atlantic routes. North American carriers, who experienced a 13.4% drop in demand in March, saw this reduced to -4.2% in April. The capacity adjustment of -4.0% much more closely matched the fall in demand than in March when there was a 7.7 ppt gap, according to IATA. Airlines in North America maintain the best overall average load factors. 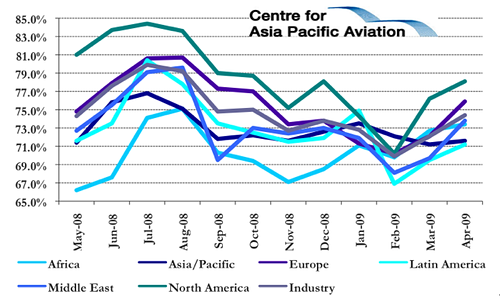 For European carriers, the 11.6% decline in passenger demand reported for Mar-2009 improved to -2.7% in April, closely matching the capacity adjustment of -2.6%. But latest data for May-2009 from the Association of European Airlines points to further double-digit declines.

Freight has found a floor – in the freezer

IATA members reported a 21.7% fall in cargo demand last month, compared to April 2008. According to IATA, freight demand appears to have found a solid floor with a fifth consecutive month at more than 20% below previous year levels.

IATA stated, “this sideways progression may indicate that we have seen the worst of the economic downturn. Business confidence is improving, but inventories remain high. Until inventories adjust to more normal levels, air freight volumes will likely continue to bounce along the bottom”.

IATA airlines FTK growth by region: May-08 to Apr-09 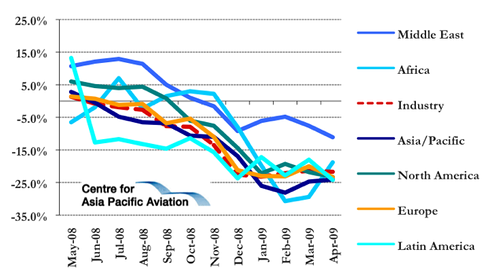 May-2009 data will be crucial, as the year-on-year distortions that affected volumes in the first four months of the year will not be present.

IATA notes that forward schedules show a return to previous-year capacity levels by the end of the third quarter of 2009. But it warned, “without a corresponding sharp improvement in demand, load factors are likely to decline rather than improve”.

The Centre expects intense pressures on yields will be felt for the remainder of 2009 in most markets. IATA is currently forecasting industry net losses of USD4.7 billion this year.