Kenya Airways’ new low-cost subsidiary Jambo Jet has received its first route licences from the Kenya Civil Aviation Authority and is looking to commence operations by the end of 2012. The airline plans to eventually operate six domestic and 16 international routes within Africa from Nairobi Jomo Kenyatta International Airport, using a fleet of Boeing 737 aircraft.

In Apr-2012 Kenya Airways announced Jambo Jet would use Kenya Airways aircraft but would operate with its own branding and product and be managed by a separate management team. The new LCC is designed to help Kenya Airways compete with LCC expansion from Fly540/FastJet as well as potentially from European LCCs that are seeking to expand into Africa. It will also assist with the development of Africa’s emerging low-cost market.

Fly540 is a hybrid carrier currently operating regional aircraft in four African countries and following some elements of the low-cost model. Fly540 is expected to be rebranded FastJet late this year as part of a strategy which will see the group take on a pure low-cost model and pursue rapid expansion across Africa. Under the FastJet project, which is being backed by Stelios Haji-Ioannou, the group will also expand into larger aircraft with the Airbus A319. The larger aircraft will initially be operated by the franchise in Ghana but expansion in Kenya is also expected under the new FastJet name, providing competition for Jambo Jet and the Kenya Airways group.

Jet Link Express is a regional aircraft operator while African Express Airways operates a mix of regional aircraft and Boeing MD82s. The launch of Jambo Jet will likely result in a significant boost in capacity (depending on number of frequencies operated) on the five domestic routes now served by other carriers.

According to Innovata data, there are only two other domestic destinations served from Nairobi Jomo Kenyatta International Airport – Kitale and Ukunda, which are served by Fly540 using Bombardier Dash 8 turboprops. These markets are likely too small for Jambo Jet to serve with its 737.

Of the 16 proposed international destinations, only four currently have LCC competition – Dar Es Salaam, Entebbe, Juba and Zanzibar. These are currently served by Fly540, according to Innovata data.

Only three of Jamob Jet’s proposed international routes are not currently operated by any carrier, Nairobi to Hargeisa, Goma and Kisangani. According to Innovata data, Jambo Jet will be the first foreign carrier serving these three airports. Hargeisa in Somalia is currently only served by Somalia’s Jubba Airways while Goma and Kisangani in the Congo are only served by Hewa Bora Airways.

Jambo Jet, depending upon frequency, will offer similar or more capacity on the 13 proposed international routes which are already served as they are now served using 737s or smaller aircraft including ATR 42s, ATR 72s, Bombardier CRJ200s and Embraer E170/E190s. 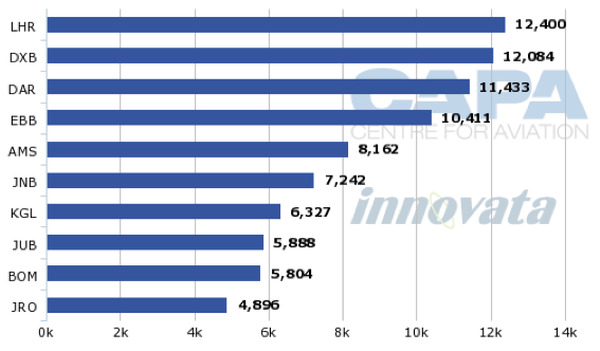 The Kenyan market is already dominated by Kenya Airways, which currently accounts for 54% of total capacity according to Innovata data. This is followed by Precision Air Services and Fly540 which account for just over 5% each, according to Innovata data. Smaller local carriers Jet Link Express and African Express account for only 4% and 2% of total capacity in the Kenyan market, respectively.

The Kenyan aviation market has a mainly international focus with only around 17% of overall capacity attributed to domestic routes (this excludes capacity provided in the domestic market by operators of small turboprop and single-engine aircraft). The Kenya Airways Group will see its total share of the Kenyan market grow even after the launch of Jambo Jet’s operations. When including Tanzania-based Precision, which is the largest foreign carrier serving the Kenyan market, the Kenya Airways Group already accounts for almost 60% of total capacity (seats) in the country. 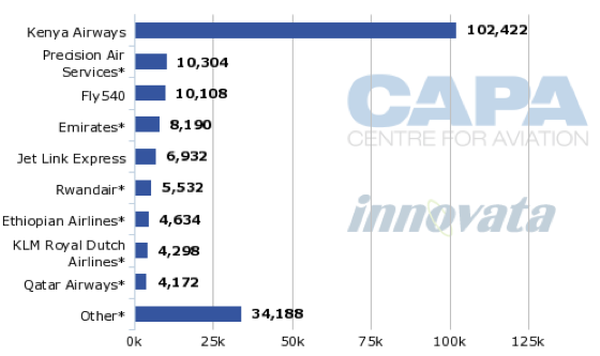 There is currently limited international low-cost penetration in Kenya, with approximately 4% of capacity provided by LCCs between Jan-2012 and Aug-2012. Domestically it is much higher at almost 23%. Jambo Jet’s arrival will see LCC penetration greatly increase, particularly internationally.

Road ahead could be turbulent

Kenya Airways may face disruption on its path to launching Jambo Jet from within its own ranks as staff could become threatened by the new LCC subsidiary. Kenya Airways is currently undergoing a restructuring programme which will see redundancies.

The coming months will see more details revealed regarding Jambo Jet’s planned operations, including its launch date and a decision on which of the proposed routes will be served first. Details could come following the completion of the current stage of Kenya Airways’ restructuring process, which has recently been delayed for various reasons, but is now underway once again.