Multiplus, the frequent flyer management company of TAM, Brazil's largest airline, raise USD393 million in its IPO on Brazil’s Bovespa index in early Feb-2010. Despite the IPO price of BZR0.16 per share, well below the IPO estimate of BZR0.18-24, and a few disappointing days of early trading, the stock finished last week strongly, closing up 6.1% on Friday to BZR0.174 per share.

The stock moved against the general trend on the Brazilian market, which has slid several percentage points over the past few days.

TAM reportedly plans to use proceeds from its IPO of the frequent flyer programme, to help fund the purchase of a USD2 billion stake (approximately 19%) in LAN from Chilean President-elect, Sebastian Pinera.

Elsewhere, Rolls-Royce's shares slipped back 2.7%, after the previous day's big gains following the company’s announcement of its strong full-year financial performance, including record revenue of more than GBP10 billion. MTU Aero Engines, which partners with Rolls-Royce in several programmes, also saw its shares slide on Friday, ending the day down 2.1%. 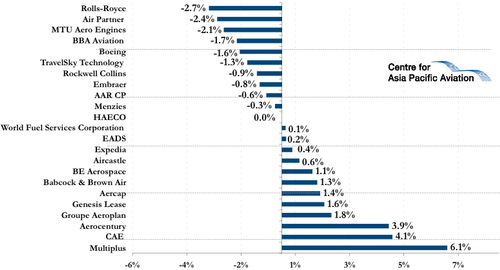