More challenges are emerging to the cosy duopoly that Airbus and Boeing hold in the market for narrowbody aircraft. According to reports in Brazil’s Folha de S.Paulo newspaper, Embraer is now conducting studies for a new aircraft, which would add another competitor into the increasing crowded 100-150 seat airliner segment.

The design could reportedly enter service in 2015-2016 and would be the company’s largest ever design. It would be based on the existing E195 regional jet, which already seats a maximum of 122 passengers in a single class configuration. The E195 and its smaller E190 sibling have proved very popular with customers, and now account for more than five out of every six aircraft in Embraer’s backlog for commercial aircraft.

Embraer’s new aircraft would be “slightly bigger” than the E-195, but the manufacturer is not looking to cross the 150-seat threshold that the B737NG/A320 family currently dominate and compete directly with Airbus and Boeing. However, an aircraft in the 100-150 seat category would still put it into direct competition with the smaller variants of these families, namely the A318/A319 and the B737-600/700, as well as a number of new aircraft that are due to fly in the next five years.

These new engines are also due to power the smaller (70-95 seat) Mitsubishi regional jet, due to enter service around 2015.

Bombardier’s CSeries has already put Airbus and Boeing’s noses out of joint, specifically for the funding used to develop the aircraft. Regulation developed to limit government support for aircraft funding excluded smaller regional jets, allowing Bombardier to access to better financing terms and to “distort competition”, according to Airbus.

An OECD meeting last month was expected start a process to review the existing aircraft funding rules, with the goal to revise and adopt a new agreement which makes no distinction between categories of aircraft. According to Bombardier, the goal is to "adopt a unified pricing model for all aircraft on the same basis in order to ensure a level playing field”, with an agreement to potentially be signed by the end of the year.

The threat from China and Russia

New aircraft from Embraer and Bombardier are not the only worry for Airbus/Boeing. China, through Comac, and Russia, through UAC, are both developing 150+ seat aircraft to compete directly with the A320/B737.

While there appears to be a wait-and-see attitude with airlines over the merits of these new designs, they potentially pose a greater challenge to the dominance of the existing manufacturing companies.

Comac especially has been pushing hard to ensure Western companies and suppliers are heavily involved in the C919, with 50% or more of the aircraft and its associated systems to be developed by international partners. The company’s objective is to eventually increase local content up to 80%, including a locally developed engine.

Key suppliers for the C919 are already in play, such as Safran Group, GE, Rockwell Collins and Alcoa, with companies looking to establish strong footholds in a market, which is expected to account for 3,250-3,750 new aircraft over the next 20 years. The first C919 is due to fly in 2014, for a 2015-2016 service entry. Irkut is looking at a similar timeframe for its MC-21.

The C919 is the first step in China’s plan to enter the large aircraft market as a major player alongside Airbus and Boeing. Rockwell Collins CEO, Clay Jones, stated at the end of last month that China will become a “first tier aircraft provider” in the future, and the Chinese market is attracting more companies as it is seen as increasingly important.

Reaction to this threat from Airbus and Boeing so far has been muted. No replacement for their current narrowbody programmes are expected until after 2020, with both companies stretched with existing troublesome widebody programmes. But, Boeing confirmed last month that it is “actively considering” a new engine for the B737, and Airbus is reportedly also doing the same, as a way of meeting the new competitive challenge.

Airbus meanwhile announced an increase in the list price of all its aircraft by an average of 5.8% - its first price increase since Jan-2008. It applies for all new aircraft from the beginning of Jan-2010, with Airbus citing ongoing US Dollar weakness and increased cost of materials as factors in the decision. It also reflects comfort in its backlog after 2009 ordering turned out to be much better than feared. 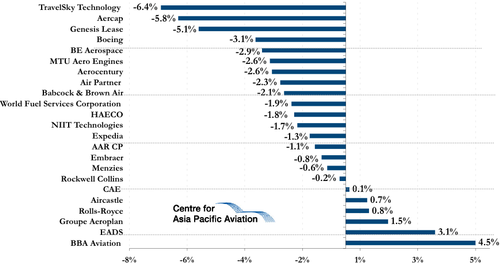