Macquarie Airports' (MAp) shares rose 7% on Friday, after it announced that it will revise its “internalisation” plan, making a AUD345 million cash payment to Macquarie Group instead of the 150 million shares previously offered at the discounted price of AUD2.30 per share.

To fund the cash payment, MAp plans to launch a 1 for 11 share offer to existing security holders at AUD2.30 per share, up to a maximum of 150 million shares.

Negotiations between MAp and Macquarie Group on the internalisation are continuing, and a vote by shareholders is expected in late September or early October (rather than the early September timeframe originally envisioned).

The cooperation of Macquarie Group is considered essential to the self-management transition, to avoid triggering clauses related to share rights and debt facilities, particularly at Copenhagen and Brussels.

Investors reacted well to the news, after concerns that the original plan to issue shares to Macquarie Group would dilute the holdings of existing shareholders.

Meanwhile, Aeroports de Paris' (AdP) shares gained 2.5% on Friday, as the company reported small gains in revenue and profitability for 1H2009, and reiterated its forecast of a slight improvement over its 2008 results for the full year, despite the decline in passenger numbers.

Zurich Airport’s performance in 1H2009 was not quite as resilient as that seen by AdP. Airport operator, Unique Flughafen Zurich, saw passenger traffic down 3.8%, but revenue was more deeply affected, dropping 6.8% year-on-year to EUR261.3 million. Non-aviation revenue was not as affected as aeronautical revenue.

Unique Flughafen Zurich anticipates a slight decline in the traffic volume during 2H2009, and a 3%-5% fall for the full year period. The decline in revenue from non-aviation business is also expected to persist. As a result, Zurich expects profit for the full year to fall by 15% to 20%. Zurich shares dropped 2.1% in trading on Friday. 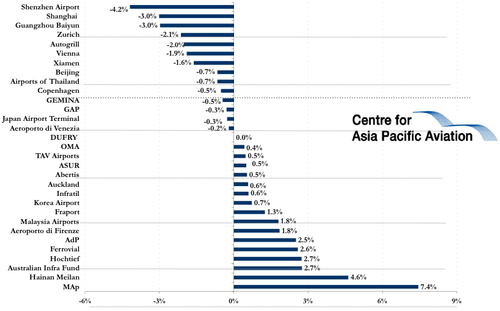