The avalanche of narrowbody and regional aircraft orders continued on the second day of the Farnborough Air Show. Firm orders and contracts (MoUs and LoIs) for nearly 220 aircraft have been signed, with options and purchase rights potentially stretching this to beyond 390 aircraft. Boeing commented that it is witnessing a release of the “pent-up demand” that had built up during the last two years of recession. Engine ordering has also been strong, with more than USD12.5 billion in engine orders and MRO agreements announced over the first two days of the air show.

Air Lease Corporation, having secured USD3.3 billion in financing since its launch, continued its ordering spree. After announcing firm orders for 51 A320 family aircraft on the first day of the show, the company followed it up with an order for 54 B737NGs, as well as six options. ALC has also stretched its interest into regional aircraft. It announced an LoI with Embraer for 15 E190s, as well as five options. It followed this up with an order with ATR for 10 ATR 72-600 turboprops and ten additional options.

ATR had a particularly busy second day of the airshow. In addition to the ALC order, new Brazilian LCC, Azul, ordered 20 of the manufacturer’s new ATR 72-600s, as well as 20 options. Turboprop leasing specialist, Nordic Aviation Capital, signed a contract with ATR for the purchase of seven ATR 42s (the fourth in 10 months). Loa Airlines and Golden Air both announced orders for two ATR 72-500s.

Avolon, another new leasing firm, also announced narrowbody orders, committing to 12 B737NGs. The Avolon order had already been posted to Boeing's Orders and Deliveries website in Dec-2009, attributed to an unidentified customer.

LAN Airlines signed an agreement with Airbus for 50 A320 family aircraft. The order includes A319s, A320s and, in a first for the carrier, A321s. LAN also announced plans to sell its 15 smaller A318s, under its fleet renewal programme. The airline signed a USD2 billion order with CFM International for CFM56-5B engines for 70 A320 family aircraft, the largest single engine order by a South American carrier.

Russian aircraft manufacturers have also had a solid airshow. After Kartika Airlines announced an order with Sukhoi for 30 Superjet 100s on Day 1, Sukhoi has also been able to announced an LoI with Orient Thai Airlines for 12 Superjets. The Russian manufacturer also confirmed that it still intends to deliver the first Superjet 100 to Aeroflot before the end of 2010, despite delays in Russian certification.

Another Russian manufacturer, Irkut, has signed a landmark agreement with Ilyushin Finance. The two agreed to a Memorandum of Intention to acquire 28 MS-21 aircraft, with an option for another 22. These are to be delivered between 2019 and 2022. Irkut reportedly secured purchase agreements for 50 MC-21s from a Malaysian investment and finance house, Crecom Burj Resources Ltd, in Jun-2010, but no official announcement has been made.

Ilyushin Finance came to Farnborough with its wallet open, signing a contract with Ukrainian manufacturer Antonov to purchase ten An-158 regional jets, with an option for a further 10. The aircraft are scheduled for delivery between 2011 and 2013.

Flybe’s order for 35 E175s has been the high point for Embraer for the show to date. The agreement includes options for 65 aircraft and purchase rights for another 40, potentially stretching the number of aircraft to 140, if all rights are exercised. The order is big news for Embraer, which has had a quite year so far. 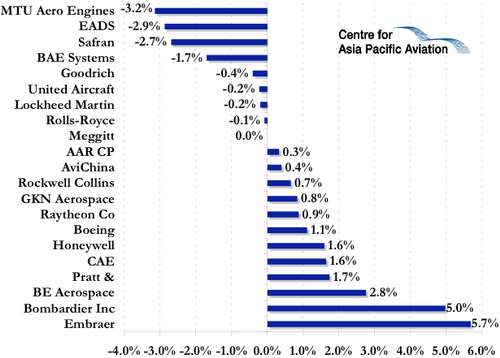 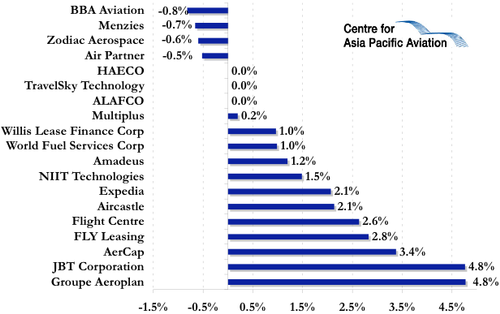