Europe’s largest LCCs Ryanair (+2.3%), Air Berlin (+1.9%) and easyJet (1.2%) all closed higher on Friday, avoiding the negative trend across Europe. easyJet’s share price was boosted by CEO Carolyn McCall’s announcement the company is preparing to pay its first dividend, after repeated requests from founder and majority shareholder, Sir Stelios Haji-Ioannou. The stock closed up 1.2% at 422p.

In New York, GOL (-0.5%), Brazil’s second-largest carrier and largest by market cap, announced it recorded a 3Q2010 net profit of BRL110 million (USD64 million), a 41%  year-on-year increase. Revenue for the period came in at BRL1.79 billion. A Bloomberg poll of analysts had expected GOL to post a BRL124 million net profit.

Airbus and Skymark (-1%) announced they have signed an MoU for four A380s, an order worth USD1.4 billion at list prices. The airline reportedly identified London, Frankfurt and New York as A380 destinations. The LCC stated it may take “up to 15” A380s as it expands its international network. The first Skymark A380 is to be delivered in 2014. 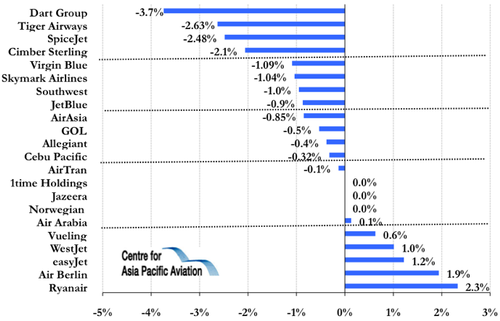