Airbus has pushed back the delivery of Malaysia Airlines' first A380, in another sign that the European manufacturer is struggling to get its big jet to airlines, even after more than three years of production.

Airbus has delayed the delivery of Malaysia Airlines' first A380 to 1H2012, due to delays in aircraft production, according to Bloomberg reports. Malaysia Airlines had originally planned to take delivery of the first aircraft in 2007, but deliveries were delayed to Jan-2011 and then to 3Q2011. Airbus stated it is now finalising a new delivery schedule for the aircraft. MAS has six of the aircraft on order, but has no plans to order additional A380s. The carrier has 55 B737-800s and 25 A330-300s on order.

Airbus plans to deliver 20 A380s this year, but only delivered three in 1Q2010 and admitted last year, when it delivered ten, that it is still having production problems with the aircraft. Striking Airbus workers blocked access to several A380 production sites in France, as well as those of other Airbus aircraft, last week.

The deferral of deliveries by Airbus follows on from Korean Air pushing back its A380 deliveries this year. Last month, the Korean carrier deferred delivery of its first A380 from Dec-2010 to 2Q2011.

Not all A380 news is negative though.

All Nippon Airways (ANA) is “more interested” in the A380, according to the carrier’s Director of International and Regulatory Affairs, Hitoshi Kawahara, speaking to the Wall Street Journal. Mr Kawahara stated increasing liberalisation would result in more fifth freedom rights to rival carriers with A380 equipment in their fleets, citing the Singapore-Japan-US market as one threat.

Meanwhile, Lufthansa is due to take delivery of its first A380 (configured with 526 seats) on 19-May-2010 before commencing scheduled services with the type in Jun-2010. Last week Lufthansa announced that Tokyo and Beijing would be its initial A380 destinations, while Johannesburg (South Africa) will be the third A380 destination:

On both routes, A380 services will initially operate three times weekly, replacing B747 operations on those three days. Daily A380 services are planned when the third and fourth A380s join the Lufthansa fleet "in a few weeks". The first long-haul flight of the aircraft will be a special flight to Johannesburg on 06-Jun-2010 for the FIFA World Cup.

In trading on Friday, EADS, parent of Airbus, saw its share price drop 1.3%. Boeing's shares were down 1.8%. The US manufacturer is also having troubles with cancellations and deferrals. El Al Israel Airlines announced the cancellation of four B777-300ERs late last week, while Air India is reportedly considering cancelling three B777-300ER orders. Boeing has reportedly offered to swap the order for B737-800s, at current prices. This is a sticking point with Air India, which wants the aircraft at the same price as when it made the B777 order in 2005.

Bombardier's shares fell 3.1% on Friday, despite Jazz Air announcing an order for 15 Q400s worth more than USD400 million at list prices. Bombardier’s rival, Embraer, was up 0.3% on Friday, after reporting stronger than expected financial results last week. The company has cautioned about ‘headwinds’ related to the appreciation of the Brazilian real. 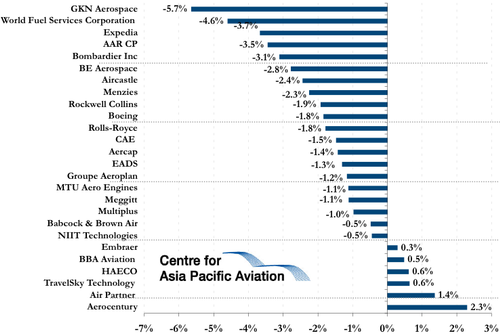