IATA reported a strong rebound in international air travel in Sep-2010 from the softer numbers in Aug-2010. Air travel volumes (RPKs) increased 10.5% following a 6.5% increase in the previous month, however, there was a different picture in airfreight where volumes (FTKs) weakened more than expected although freight (FTKs) still remains 14.8% higher than Sep-2009 and level with the pre-crisis peak.

IATA stated: “Stronger air travel but weaker air freight volumes in September offers a very mixed picture of the situation in air transport markets. But air freight has usually been a good leading indicator. What happens next depends on the economy. Unless private spending steps in to replace the temporary boosts from fiscal stimulus and stock-building, the softness now evident in air freight could spread to air travel markets later in the year.”

On a month-on-month basis, international passengers grew 2.1% in Sep-2010 marking a robust rebound from the softer numbers seen in Aug-2010, particularly in the Middle East, partly a function of the timing of Ramadan which overlapped more in August than in September this year. Passenger capacity grew at a slower pace driving up load factors while freight traffic fell on a month-on-month basis representing the second successive month-on-month fall dipping back to the pre-recession peak.

Comparing the level of traffic in Sep-2010 to that at the end of 1Q2010 shows an annualised average growth rate of just under 9%. This is slightly below the 10% average annualised growth recorded between the low point of the market in mid-2009 and the end of 1Q2010. Although this points to a modest slowdown in international air traffic growth, these rates are still well above trend despite softer economic conditions.

During Sep-2010, traffic (RPKs) increased 10.5% following a 6.5% increase in Aug-2010 with capacity growth of 7.3%. Part of the year-on-year travel acceleration was due to a fall in Sep-2009. IATA reported there were some special factors such as the timing of Ramadan which accentuated the volatility between the months, but growth in all regions suggests last month’s weakness was the normal volatility seen in travel patterns. 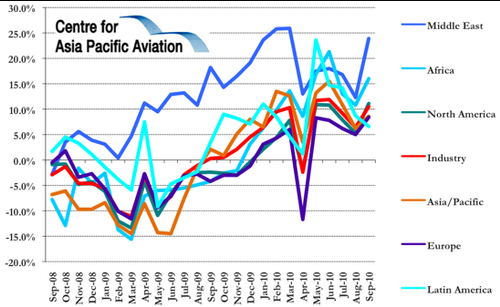 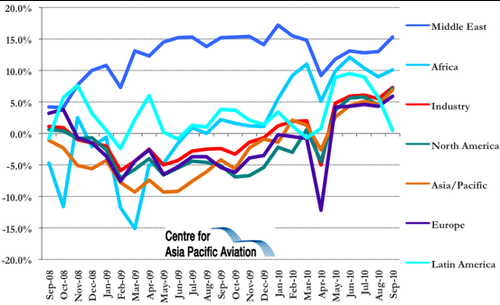 After reaching a peak of 79% on a seasonally adjusted basis in Feb-2010, passenger load factors had slipped back to 77.5% by Aug-2010 as capacity began to rise faster than demand this year. However, load factors in September have spiked to a seasonally adjusted 78.9% - back to the peak seen earlier this year – as capacity growth was exceeded by traffic growth. However, IATA warned that there is volatility in load factor data, stating the “higher load factor level may not persist over the months ahead, especially if the broader trend seen this year of accelerating capacity combined with moderating traffic growth continues”.

In the freight segment, a reduction in freight volumes combined with flat capacity resulted in a fall in the industry international freight load factor to 52.3% on a seasonally adjusted basis. The load factor is still above the average level seen in the years ahead of the recession of around 51%. However capacity addition in excess of the rate of demand growth will inevitably put downward pressure on load factors. 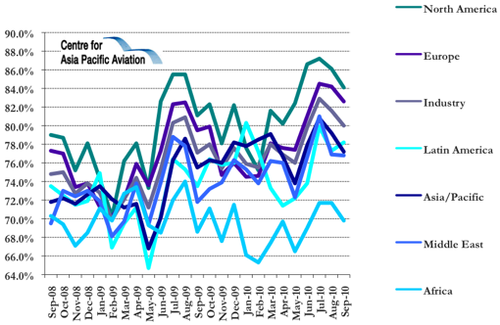 International FTKs increased 14.8% in Sep-2010 although there was a deceleration in growth from the 19% seen in the annual August-August comparison with month-on-month comparisons also weaker. The level of traffic slipped 6% from a high point in May-2010 and level with the pre-recession peak.

The overall fall in industry freight volume over recent months is greater than expected following the very strong post-recession rebound. The decline has occurred as inventory-sales ratios have been restored to more normal levels with restocking activity tailing off.  Trade growth has also been relatively flat since May-2010. 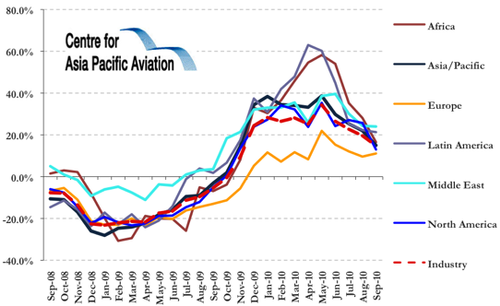 Regional patterns are now changing for air travel and freight. During 2009 airlines in Asia Pacific and Latin America reported very strong post-recession rebounds while Europe and North America lagged. However, since the start of 2010 the situation has reversed with a slowing of growth for Asia Pacific and Latin American airlines but some acceleration in traffic carried by European and North American airlines.

Outlook: Traffic and profits to slow in 2011

Looking forward, growth will continue to slow, consistent with IATA’s global industry outlook. The industry is now expected to post a profit of USD8.9 billion – up from the Jun-2010 forecast of USD2.5 billion – based on an exceptionally strong first half of the year.  Meanwhile, much of what happens next is dependent on the economy