Middle Eastern carriers remained the single “bright spot” in the latest international air traffic statistics from IATA for Jun-2009. The region’s airlines reported a 12.9% increase in demand (RPKs), slightly trailing the 15.2% capacity (ASKs) increase. According to IATA, the Middle East airlines are “growing market share with particularly strong traffic growth on routes to Europe and Asia”.

Worldwide IATA scheduled traffic fell 7.2% year-on-year last month (a slight improvement on the 9.3% fall in May-2009), while freight demand was down 16.5%. International passenger load factors stood at 75.3%, down from 77.6% recorded in Jun-2008, “leaving average fares and yields under significant pressure”, according to the industry body. IATA added that Jun-2009 revenue on international markets “fell by a shocking 25-30%”. 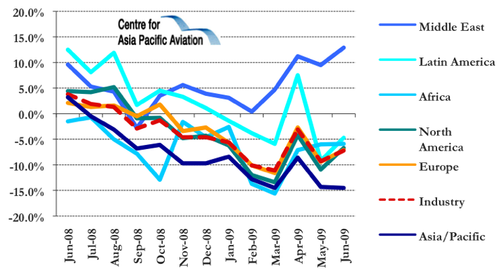 Asia Pacific carriers recorded a 14.5% fall in demand in Jun-2009, following a 14.3% reduction in May-2009. The swine flu scare has also contributed to “delaying any early revival in air transport” in the region, according to IATA. The airline body estimates the impact of swine flu took up to 4 ppts off growth rates for the region’s airlines last month.

North American airlines reported a “relative improvement” in Jun-2009, with demand falling 6.7% in Jun-2009 (compared to the 10.9% fall in May-2009). The smaller decrease is likely due to discounting. Load factors of 82.6% were the highest of any region, but revenue from international markets was down about 29% in June, the same as the previous month, according to IATA. 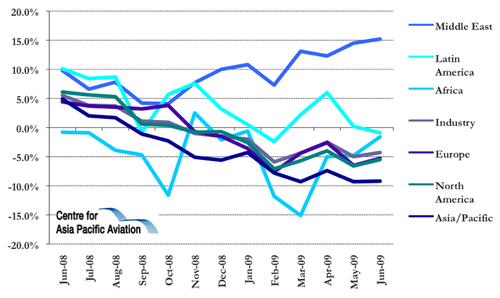 In Jun-2009, freight demand remained relatively stable, but at a level 16.5% lower than the same month last year – the 13th consecutive month of contracting demand. IATA stated, “despite reaching a bottom in Dec-2008, improvement has been slowed by high inventory levels and soft demand. At the current pace, it will likely take several years before demand returns to early 2008 levels”.

Asia Pacific airlines reported a 15.8% reduction in freight traffic in Jun-2009. While still extremely weak, this is an improvement compared to the 18.1% fall in May. This reflects improved economic conditions in a number of emerging Asian economies, such as China, according to IATA.

The economic recovery in Europe and North America is being “held back as consumers choose to repay debt rather than increase spending”, according to the airline body.

European carriers saw the weakest demand for freight in June at -20.3%. This was a softening in demand from the -19.2% experienced in May. North American carriers reported a 18.6% fall in June demand. This is relatively unchanged from the 18.8% fall in May-2009. 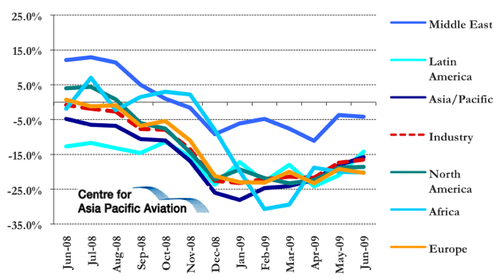 IATA Director General and CEO, Giovanni Bisignani, observed that while it appears that there is stabilization in some markets, “this comes at a steep price”. He added, “capacity cuts have not kept pace with demand falls. Even with lower fares, the load factor remains 2.3% below last year’s levels. Airlines are seeing international revenue falls of up to 30% at the start of the busy June-August period when airlines traditionally make their money".

He concluded, "the outlook remains bleak”.