IATA’s latest 2012 industry forecast has airlines in the Middle East as the big winners, with the annual profit forecast for the region's airlines revised from USD300 million to USD500 million. It does come with a caveat though: a spike in oil prices could turn the forecast profit into a USD200 million loss for the region’s airlines.

In 2011, airlines in the Middle East reported a combined annual profit of approximately USD1 billion, according to IATA’s estimate. Despite the regional disruptions and spiralling price of oil, passengers in the region kept flying and Middle Eastern carriers increasingly developed their links with the rest of the world.

As they have been for years, financial results for Middle Eastern carriers were unevenly spread across the region.

Some of the region’s largest carriers were able to report profits – Emirates expects its FY2011/2012 (year to 31-Mar-2012) results to be well down on the previous year’s record of USD1.6 billion, thanks to higher oil prices. Qatar Airways also expects to be profitable for the same period, although again results are expected to be dragged down by oil, after it achieved a USD205 million result in FY2010/2011. Etihad Airways reported a maiden net profit, albeit just USD7 million, in 2011 and expects to improve on this performance in 2011.

Several regional LCCs were also profitable. Jazeera Airways had its best ever result in 2011, with a net profit of USD38.9 million. Its outlook is for another year of financial growth, although it is keeping a strict reign on its fleet and network growth. See related article: Even with record profit Jazeera Airways stays on its new course of limited growth

Air Arabia reported a solid result of USD74.6 million. The carrier has aggressive expansion plans, both for its main operation at Sharjah and its secondary hubs in Morocco and Egypt, with one aircraft already delivered and five more due through the year.

The profit forecast in the Middle East was the only upwards regional profit revision in IATA’s latest industry guidance. However, the improved outlook does not mean that some regional carriers are still not suffering. 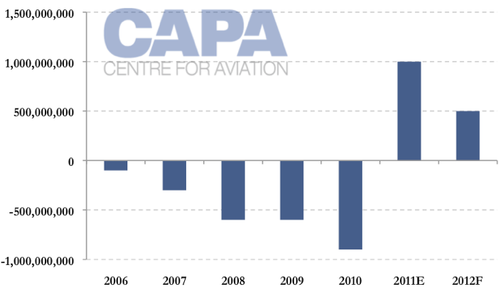 The regional unrest brought about by the Arab Spring hit results heavily, notably among the smaller and state-owned airlines. The perennially troubled Gulf Air and Kuwait Airways both suffered during the year. Gulf Air reportedly lost around USD500 million and is looking at another round of government assisted restructuring to whittle this down to USD210-265 million. The Bahrain government is looking at a USD1.76 bail-out package for the airline.

Oman Air, which is in the midst of its ambitious redevelopment programme, does not expect to report profits until around 2014.

Royal Jordanian, which had been profitable in 2009 and 2010, suffered a record loss of USD81.4 million in 2011. The carrier has instigated a network rework in light of the results and will prune four routes and reduce capacity on another seven over Mar/Apr-2012.

International traffic to/from the Middle East is now edging back towards the levels seen in 2009 and 2010, when growth by airlines in the region appeared unstoppable. Jan-2012 international passenger traffic was up 14.5% year-on-year, a level not seen since Nov-2010.

The growth is being driven by the expansion of airlines in the six-member Gulf Cooperation Council bloc. The region is home to the Middle East’s four largest carriers: Emirates, Saudi Arabian Airlines, Qatar Airways and Etihad Airways, all of which reported healthy growth in 2011. Also contributing to the dominance of the region are the GCC-based LCCs, including flydubai, NAS Air, Jazeera Airways and Air Arabia. 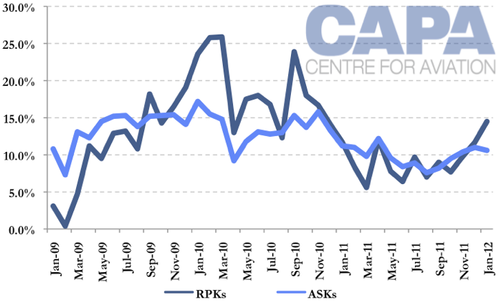 Capacity growth is accelerating as well. After dipping during late 2010/early 2011 – coinciding with the onset of the regional unrest – capacity growth by Middle East airlines is climbing back towards consistent double-digit levels. IATA reports that international capacity by regional carriers rose 10.6% in Jan-2012, after increasing 11% in Dec-2011.

Even with around 750 aircraft on order by regional carriers, capacity remains closely aligned with demand in Middle East.

However, passenger load factors have steadied noticeably over the past few months. Load factors typically spike during the peak summer travel months, averaging above 75% during the period. 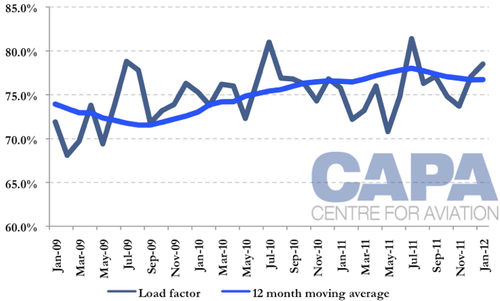 Despite the small drop off recently, Middle East load factors remain among the highest of any region globally. Only airlines in North America and Latin America have consistently achieved higher load factors for international traffic.

Middle East regional took delivery of 16 new aircraft from Airbus and Boeing over the first two months of 2012. Just one of these deliveries – an A320 to Lebanon’s Middle East Airlines – was to a carrier outside of the GCC.

Carriers in the region are benefiting from the acceleration of production by major aircraft manufacturers, notably Airbus and Boeing. Between them, these two manufacturers plan to deliver more than 1000 aircraft globally in 2012, and will continue to accelerate production through 2013.

Many of these aircraft will be used to open new routes and Middle Eastern carriers plan to launch a sizable array of new routes for 2012.

Qatar Airways has announced details of 15 new routes for 2012, three of which it has already launched. Emirates also kicked off the year with flurry, adding six new routes in the first three months of the year. The carrier plans to launch at least five more this year.

Etihad Airways has continued in its more measured approach to route development, adding just two new routes this year and announcing only two other planned route launches. However, the carrier has been concentrating on thickening its existing network, rather than adding large numbers of new routes.

Outside of the Big 3, network carriers in the Middle East are behaving much more cautiously and concentrating on their regional networks. Gulf Air and Royal Jordanian have dropped seven routes between them this year, and a number of routes are to be cut later in the year. LCCs are taking more aggressive strategies – notably flydubai and Air Arabia – with more capacity into South Asia, southern Europe and northern and eastern African destinations.