Miami airport, ranked at number 28, is a hub for the Americas

While much has changed at Miami since its opening in 1928, one thing has remained constant; its enduring links with Latin America. Initially known as Pan American Field, it was the first site of Pan Am’s operations, although these were soon moved to the seaplane base at Dinner Key. Nonetheless, Pan Am’s first passenger flight left from Miami in 1929 and as the company slowly died many years later, the last operating remnants were the Latin American routes.

In the 1930s, the airport became the base for Eastern and National Airlines and following the war, the site was purchased from Pan Am and expanded. In 1980, searching for a domestic network to feed its international flights, National was acquired by Pan Am as it sought to improve its competitive position by adding a domestic network.

Along with Pan Am, Eastern was a huge player at MIA and, for a while it was the region’s largest employer, making its demise in 1991 a major event for the airport.

A hodgepodge of operators

In the post-deregulation world, Miami hosted an incredible assortment of airlines, most of them based in, or flying to, Latin America. Perhaps no other US airport has dealt with a similar phenomenon, as shown by the charts below.

First, a disclaimer and explanation. The original source materials used were the August 1981 and August 1991 OAGs. The list of international destinations was established using those two sources and does not include destinations that either 1) operated between those dates but not at the time either OAG was published, 2) flights to nearby Caribbean or Mexican destinations which were in separate OAG volumes at the time, and 3) are newly instated in the period between 1991 and 2011. The service shown in 2011 encompasses only destinations that were operated in either 1981 or 1991.

The purpose of the charts is to chronicle the “revolving-door’ nature of carriers and service at the airport, showing a shift from an airport dominated by Eastern and Pan Am to its present prime tenant, American Airlines.

Not shown by the chart are the changes in service patterns that have taken pace as well. Almost all of the services operated in 81 and 91 were sporadic, with different days having different flight routings and often, times of operation. The current operators usually operate daily (or multiple daily) flights at consistent departure times.

While Miami today has virtually no low-cost operators, in 1981 the short-lived Air Florida operated to a number of European and Latin destinations and the airport was also a port-of-call for Laker to points in the UK.

In 1991, Tower Air flew non-stop to Stockholm and onwards to a number of additional points in Scandinavia. By 2011, all service was provided by established and recognisable airlines, with the only exception being Venezuela’s SBA (S3), which harks back to previous eras when small airlines operated very old aircraft to a few selected destinations.

International nonstop services operated in 1981 or 1991 and current offer

Looking at the list of carriers that operated the above routes is a veritable walk through 20th century aviation history. Of the 46 carriers that flew during the period, only 20 are still operational, a litany of defunct international operators likely unrivalled elsewhere.

Things are different today. American Airlines has not only replaced the services of previous operators, but virtually “owns” the airport with a stunning 70% share of seats.

And even those numbers are deceptive in terms of AA’s influence in specific markets. Between Miami and San Francisco/Los Angeles, American operates every non-stop save a single B738 operated by Delta to LAX. It provides the only non-stop service to a host of cities like Boston, St. Louis, San Juan, Dallas and even United’s Denver hub.

Internationally, it has a monopoly position to Barbados, Montreal, Montevideo, and Santo Domingo, amongst others. 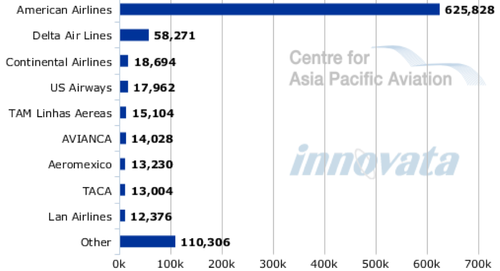 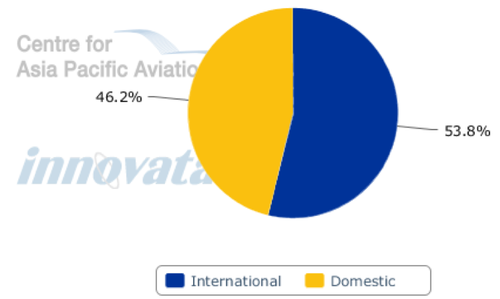 Low-cost competition is down the road

Additionally, the airport has virtually no low-cost presence to challenge legacy pricing levels. The sum total of low-cost competition is a single daily flight by Westjet to Toronto and one daily service by AirTran to Baltimore.

However, the region has ample low-cost service located at Ft Lauderdale Airport (FLL), 27 miles and 35 minutes north of MIA, an airport with almost 2/3 of its seats offered by LCCs.

As might be expected at an airport dominated by American and served by LAN, Iberia and British, oneworld is the dominant alliance. And, compared to others in the US, the unaligned segment is quite small, probably due to the absence of LCCs.

Furthermore, due to American’s overpowering domestic network, airlines from other alliances such as TAM or Air France, have few onwards connecting options within their group and many of those cities already have direct service so the passengers are probably Miami-bound. 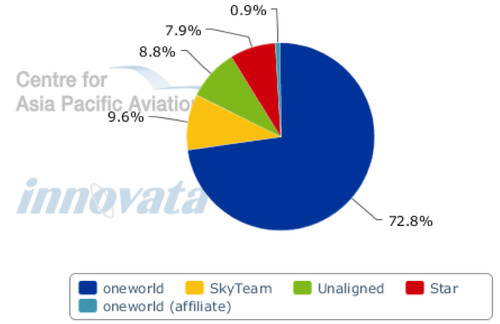 The next chart shows the distribution of international seats by region, and the Caribbean/Latin focus is obvious. Despite the region’s cultural roots with West Africa, there is no service to that continent. Equally absent is any direct service to the burgeoning Asian sector. Despite the efforts of other carriers and hubs to break into the Latin market, with both Atlanta and Houston having substantial networks, Miami remains the preferred US gateway. 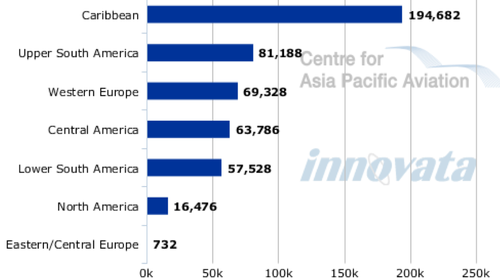 When looking at the individual top destinations served internationally from MIA, the position of American remains impressive. To LHR, BA and AA offer 2 B744s and a B772 each day, in competition with a DL B764 and a Virgin B774.

To second place San Juan, it is the only operator, and to Sao Paulo (GRU) 11 weekly TAM A330 flights compete against American’s schedule of 14 B772s and 7 B763s, an offer more than double that of the Brazilian carrier. 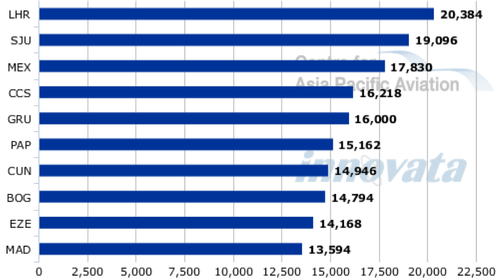 Average fares from Miami to New York (JFK) range from a low of USD200 to a high of USD534. From nearby Ft Lauderdale, over the same period, the JFK spread is from USD165 to USD415, a considerable premium for MIA access. To Newark, prices are even higher; USD249-569.

Carriers change, Miami’s lure does not

Despite a complex past, littered with defunct airlines, Miami retains its crown as the preferred gateway between the US and Latin America. American’s position, enhanced by the presence of its oneworld partners, is not likely to be undermined as long as the carrier remains healthy.

Should things at American change, Miami would likely retain its spot but undergo yet another shift of airline representation.