Domestic passenger traffic in Mexico slowed to the single digits during 1H2013 after recording 10% growth in 2012. The country’s largest carrier Aeromexico is attributing some of the decrease in demand to a softening Mexican economy, which could pressure the country’s low-cost carriers whose business models are built on capturing members of the Mexican middle class that still travel largely by bus.

It is not yet clear how demand patterns within Mexico will shape up for the remainder of 2013, but all of the country’s main carriers continued to record year-on-year growth for Jun-2013 with the exception of Aeromexico. Mexico's only remaining legacy carrier is seeing its domestic market share slide as it focuses more on international expansion.

A slower Mexican economy creates some short-term pressure on demand

Mexico’s domestic airlines transported about 14 million passengers between Jan-2013 and Jun-2013, which is roughly a 7% increase year-on-year, according to data from Mexico’s DGAC. That compares with 11% traffic growth in 1H2012. 2012 marked the first year since 2007 that Mexico recorded double-digit growth in its domestic market.

At the time it released its 2Q2013 earnings Aeromexico also highlighted slowing growth in the Mexican domestic market for the first five months of 2013 as traffic for that time period increased 6.3% compared with growth of 8.3% for the year prior.

The carrier cited signs of softness in Mexico’s economy as a driver of the slower domestic traffic growth as the Mexican General Economic Activity Indicator increased just 1.7% for the first four months of 2013 compared with a 5% growth rate for the same timeframe in the previous year.

The Bank of Mexico recently cut its economic growth forecast for the country, and now reportedly expects GDP growth between 2% and 3% for 2013 versus a prior forecast of a 3% to 4% increase. The bank assessed that during 2Q2013 the slower growth exhibited by the Mexican economy since 2H2012 intensified.

There could be some improvement during 2H2013, the bank noted, as public spending and private consumption are expected to increase in Mexico, coupled with an improving US economy. According to the US census bureau, Mexico is the second largest trading partner of the US.

Despite the economic uncertainty that began to settle on Mexico in mid-2012, its domestic air traffic has continued to grow. For the month of Jun-2013 domestic traffic increased 8% to about 2.5 million passengers.

Grupo Aeromexico saw its domestic market share fall roughly 3ppts year-on-year for the month of Jun-2013 from 38% to 35%. Aeromexico Connect recorded a 2ppt fall to 18% and Aeromexico mainline recorded a 1ppt decrease to 17%.

Mexico’s largest carrier was also the only airline to record a traffic decrease – about 2% – in Jun-2013.

Interjet grows its domestic traffic ahead of Superjets joining its fleet

Interjet recorded the highest increase in Mexican domestic passengers during Jun-2013 of 24%, which is reflected in a 4ppt increase in its market share year-on-year to 26%.

But with the delivery of the first Sukhoi Superjet 100 (SSJ100) in late Jul-2013, Interjet plans to use the 93-seat on some domestic and international routes that are too thin for its larger 150-seat Airbus A320s and also complement the larger narrowbody aircraft.

With Mexico’s GDP growth rate targets holding steady for 2014, Interjet is likely to press forward with its strategy to capture passengers using long-haul luxury and premium inter-city buses, which the carrier estimated at 97 million annually in 2012. The SSJ100 will allow Interjet to target those customers on thinner domestic routes, further pressuring Aeromexico, which operates Embraer 170/190s in those types of markets through its subsidiary Aeromexico Connect.

Mexico’s other major carriers, Volaris and VivaAerobus, grew their domestic traffic year-on-year by 14% and 7%, respectively in Jun-2013.

While Interjet turned its attention to international expansion during 2012, Volaris opted to expand domestically after making a transborder push into the US beginning in 2009.

Part of Volaris’ domestic push was from Guadalajara, where it launched several new domestic services including Chihuahua, Monterrey, Puebla, Los Mochis and Cancun. Presently, Volaris is the largest operator at Guadalajara, accounting for almost 38% of the one-way seats on offer. Guadalajara is also Volaris’ third largest base after Mexico City Juarez and Tijuana. 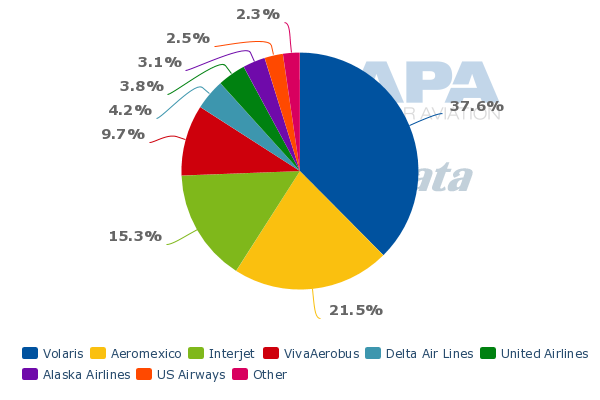 Both Volaris and VivaAerobus have also made a push from Cancun airport during the last year, hoping to capitalise on the growing numbers of discretionary travellers in Mexico travelling to leisure destinations. Volaris’ new crop of destinations launched in Jul-2013 – Ciudad Juárez, Chihuahua and Morelia joined its existing service from Cancun to Aguascalientes, Guadalajara, Leon, Mexico City Juarez, Puebla Hermanos, Queretaro, Toluca and Tijuana. Flights from Cancun to Queretaro were introduced in late 2012.

VivaAerobus is in the midst of building a base in Cancun, and largely serves markets from the beach resort that currently are not operated by any other carrier. As of Jun-2013 it was the sole operator on eight of its 12 routes served from Cancun – Cuernavaca, Oaxaca, Reynosa, Tampico, Tuxtla Gutiérrez, Torreón, Veracruz and Villahermosa.

With just a half-year of traffic results logged for Mexico’s domestic market, it is too early to tell if the slower growth will continue throughout the remainder of 2013.

Given the current somewhat weak economic overhang in Mexico and the combined 100-plus narrowbody aircraft Interjet and Volaris have on order, the domestic space within the country will be interesting to watch throughout the remainder of 2013 and the next few years. Aeromexico is somewhat shielded as it has a long-haul international network and the financial backing by its powerful SkyTeam partner Delta, but its latest results show that even a solid fortress is not always impenetrable from soft demand.