Shares in airports worldwide started the year on a positive note, with the majority of airports closing higher in trading yesterday, led by Mexican airport operators, GAP and ASUR, which soared 5.2% and 4.5%, respectively.

In the Asia Pacific region, airport shares were generally mixed with Malaysia Airports, Beijing Airport and MAp going against the trend, closing down 1.5%, 1.4% and 1.3%, respectively. Meanwhile shares in Hainan Meilan International Airport bounced back yesterday, up 0.9%. HNA Airport Group, owner of 12 airports, including Hainan Airport, reported traffic across its airports broke the 20 million mark for the first time in 2009 with a passenger growth of 10.2%. 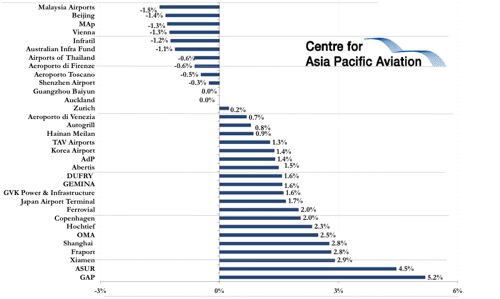