The aircraft leasing market is in a state of unprecedented flux. The world’s largest lessor, ILFC, is still up for sale after more than 12 months, and its CEO its reportedly considering hiving off a section of the company and acquiring part of its aircraft portfolio to launch his own firm.

Last week, the Royal Bank of Scotland Group reportedly appointed Goldman Sachs Group to seek out a buyer for its aircraft leasing unit, RBS Aviation Capital. With total assets of approximately USD8 billion, it is a major player in the market.

Despite continued confidence from investors in leasing companies, there is growing wariness, due to the potential of distressed sales of major aircraft leasing companies in the fallout from the global financial crisis. Both ILFC and RBS Aviation Capital are expected to sell for prices significantly below their book values.

Genesis Lease for sale too?

Genesis Lease is now the latest to look like it might be on the market. The company’s shares traded up 12.1% on Monday, after a report late last week suggested that the company could be the target of an acquisition drive by Dutch lessor, AerCap. AerCap's shares fell 0.2% yesterday.

Genesis confirmed on Monday it is in discussions with an unidentified party concerning a possible M&A transaction, but gave few other details. The company stressed there it could give no assurances that any agreement would be reached, and it does not intend to make further comment unless or until there is a transaction to announce.

The Irish lessor is in a strong financial position, so there is no suggestion of a distressed sale. Genesis has just under USD1.8 billion in assets and reported an 18% increase in profit in 2Q2009, to USD169.8 million. With a cash position of approximately USD350 million and 54 of its 55 aircraft placed with customers, and all orders for the next two years already placed, the company is in a position to command a fair premium, despite concerns about the strength of any recovery in the airline sector. 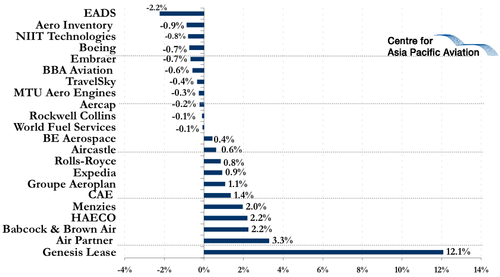