Airport ground handler and media distributor, Menzies Group, soared 24.2% in trading on Wednesday, after the company reported a 15.8% increase in underlying profitability in 1H2009 and forecast that full-year results would be ahead of analysts’ estimates.

Overall revenue declined marginally (-0.6% to GBP821.3 million), but underlying profit before taxation increased to GBP13.2 million, despite the challenging climate for its aviation segment. In a “resilient performance”, Menzies Aviation revenue increased by 3.7% to GBP248.1 million. Ground handling accounts for 59% of aviation revenue, with cargo handling making up 26% and cargo forwarding 19%.

Volumes in both cargo (-18.2%) and ground handling (-7.4%) markets were severely affected. US, UK and continental European cargo markets suffered the worst, with Menzies reducing capacity “where possible”. According to Menzies, over-capacity has led to a predatory pricing environment, with the cargo arm losing four contracts in the period.

Ground handling performance was better, with 25 new contracts entered into during the period (three  new contracts have also been signed in the last few months). New operations were launched at Bristol, Stansted, Tenerife and Ibiza to support easyJet operations. The impact of Swine Flu on Menzies’ Mexican operations has been significantly less than first expected and was not material to the business.

During 1H2009, Menzies Aviation focused on getting the most from its existing operations, resulting in lower start-up costs (down by GBP2.7 million). Underlying profits from aviation were broadly in line with last years’ result, at GBP4.0 million.

Menzies suffered GBP3.0 million in one-off costs over in the half year, with restructuring costs of GBP4.4 million for Menzies Aviation partially offset by net gains of GBP1.4 million.

Aviation business continues in line with the company’s expectations, and is expected to deliver revenue and profit performance matching forecasts, although airline schedules for 4Q2009 are not yet certain. Cargo volumes appear to have stabilised (albeit at a very low level), but the outlook for ground handling is better, with cost savings and contract wins offsetting volume reductions. Overall Menzies Group full year underlying profit before tax “will be ahead of current expectations”.

Meanwhile, aircraft lessors have continued to bounce back after Monday’s share falls. Aircastle rose 4.4%, while Genesis Lease was up 3.3%, leading smaller gains from Babcock & Brown Air and Aercap. 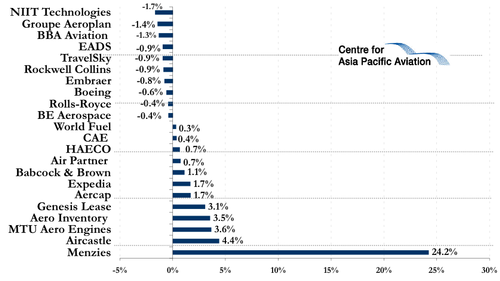