Menzies Group has lifted its forecast for the full year, with Chairman, William Thomson, announcing the company has made a positive start to the year. Menzies' Board now expects the full-year result to be ahead of market forecasts. The improved forecast comes less than a month after Menzies announced it was "trading in line with market expectations".

According to the company, the aviation business, focused on ground handling, is "benefiting from its geographical spread, a focus on regional densities and the cost reduction efforts made during 2009". Menzies Aviation makes up just under a third of group revenue and posted a GBP1.4 million operating loss in 2009 (or a GBP3.2 million operating profit once JVs/associates were included).

Despite the impact of the Apr-2010 ash crisis, estimated at around GBP2.5 million to the company, Menzies reports its ground handling business has made progress. Underlying earnings during 1Q2010 were boosted by increased de-icing revenue in the early part of the year and a general recovery in trading. Cargo handling benefited from a 20% increase in volumes across Menzies’ network.

The company has also benefited from several contract wins early this year, including Malaysia Airlines in Australia, Emirates in the Czech Republic and a "number of other attractive airlines across the network".

Other major movers were HAECO and Aerocentury, which lost 4.5% and 4.4% respectively. Air Partner was up 4.5%, while TravelSky Technology gained 4.7%. 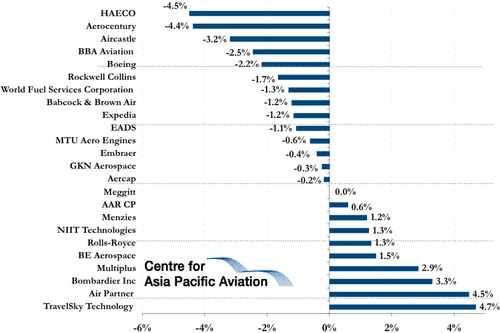