Menzies and Air Partner recorded strong gains, both up more than 7%. GKN Aerospace gained 3%, with the company recently posting a GBP88 million 3Q2011 profit and maintaining its upbeat outlook for 2010 and 2011. Aerospace sales remain down at the company, slipping 4% in the last quarter, although business in the sector is expected to recover strongly through 4Q2010 and into 2011, as airlines continue to add capacity and traffic.

Boeing cautioned that the ramp-up in deliveries of its B787 will be “longer and shallower” than previously expected, with the company targeting approximately two dozen deliveries in 2011. Deliveries to launch customer, All Nippon Airways, remain on track for 1Q2011. Issues with the availability of Rolls-Royce engines may translate into slower deliveries for subsequent aircraft, although Boeing and Rolls-Royce are working through the challenges.

Rolls-Royce shares plummeted 7.1%, after a small rally earlier in the week. The news of a USD1.2 billion order from China Eastern Airlines for Trent 700 engines to power 16 Airbus A330 aircraft has not been enough to offset the damage from the Qantas A380 engine incident. Singapore Airlines announced it will carry out precautionary replacements of the Trent 900 engines on three of its 11 Airbus A380s. 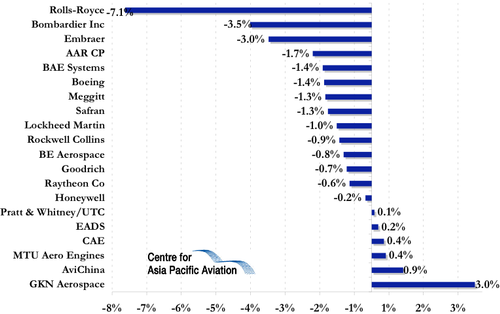 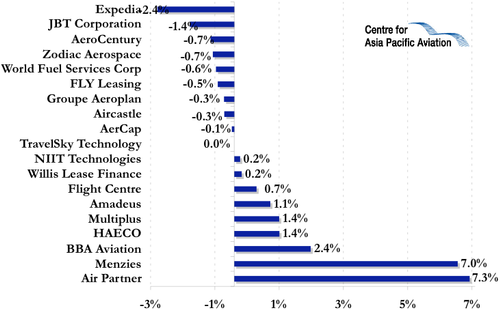