Shares in Malaysia Airlines slipped 3.5% yesterday, following the release of its financial results earlier in the week. It follows a 6.5% share price rise the previous day.

Malaysia Airlines swung to a net loss of USD167.8 million in the second quarter (compared with a profit of USD275.4 million in 2Q2009) as earnings were impacted by higher fuel costs (+44.2% to USD347 million). The carrier reported a USD89.8 million operating loss in the period, although this represented an improvement on a loss of USD133.8 million in the previous corresponding period, while operating revenues increased 26% to USD1,006 million. Yield increased 2% to USD 7.52 cents in the period (with freight yield increasing 21% to USD 26.57 cents), with RASK increasing 15% to USD 5.57 cents.

Following the result releases, stockbroking and research houses have generally maintained their hold recommendations for the carrier, despite the losses in the quarter, based on the carrier's potential to realise greater yields with a new fleet in 2011, although some brokers reduced their target prices on the national carrier.

Specifically, MIDF Research maintained its neutral stance on the stock with a revised target price of MYR2.50, stating MAS would be focusing on increasing yields that would offset any fuel price increase. MIDF commented: "We expect MAS will benefit from its network expansion, especially on its newly introduced Eastern hub in Sabah", adding: “We expect the positive impact will likely be seen in the third-quarter of 2011”.

OSK Research upgraded MAS to “neutral” despite expressing concern in the carrier's inability to generate sufficient yield to cover its increased fuel expenses, despite encouraging passenger carriage in the month. OSK commented: "We think its failure to extract yield was due to poor load factors on some routes, which capped the quantum of increase in ticket prices”.

OSK added that it expected the company to be in a better position in 2011, once it takes delivery of its new fleet from mid-2011 onwards. It also expected MAS to be profitable in the second-half as yields increased with travel demand, but added: “We caution that the yield maximisation has its limits as increasing too aggressively will come at the expense of load factor”.

Singapore to name new CEO by end of Oct-2010

Meanwhile, shares in Singapore Airlines also declined (by 2.0%) yesterday. The carrier reportedly plans to name a new CEO by the end of Oct-2010, replacing outgoing CEO, Chew Choon Seng, with the new candidate reportedly likely to come from the airline’s existing senior management.

In the Japanese market, the MLITT reportedly plans to halve the aircraft fuel tax from FY2011. The tax imposed on aircraft fuel used on domestic routes currently stands at JPY26,000/kiloletre, which would be reduced to JPY13,000 according to the plans, which would mark the first reduction since the tax's introduction in 1972. Halving the tax would lessen the financial burden on domestic airlines, with both Japan Airlines and All Nippon Airways stating it would consider lowering their airfares if the fuel tax is reduced.

Transport Minister, Seiji Maehara, has reportedly been calling for a review of the airport improvement account, with the fuel tax constituting a revenue source for the airport account. The Ministry is also considering reducing airport landing fees. Based on FY2010 account budget estimates, the Ministry estimates fuel tax revenue would account for JPY71 billion of the project total revenue, or 16% of total revenues.

Meanwhile, ANA reported international passenger numbers rose 12.3% year-on-year during the Japanese summer vacation period, between 06-Aug-2010 and 15-Aug-2010, led by a 23.4% increase on China sectors. The carrier reported a 5.6% increase in domestic passenger traffic during the period.

Also in North Asia, in China, CAAC reported that the nation’s airlines handled 25.5 million passengers in Jul-2010, a 21% year-on-year increase, with double-digit growth across domestic (+19.6%), regional (+53.1%) and international (+43.9%) services. Average aircraft utilisation also increased in the month, to 9.8 hours per day. 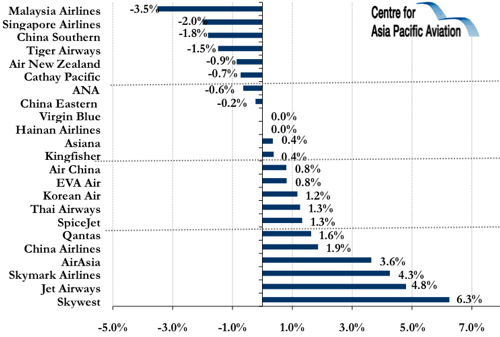