MAp also simultaneously increased its stake in Copenhagen Airport, which has a much lower debt profile than Bristol Airport and is showing signs of improving profitability, according to MAp CEO, Kerrie Mather.

Ms Mather added, “with the MAp portfolio having grown significantly over the past five years, Bristol now represents just 4% of our portfolio by value and we feel that our investors are better served deploying our assets elsewhere.”

MAp shareholders are scheduled to vote on MAp’s plans to internalise management and buy the management rights from parent, Macquarie Group, for AUD345 million on 30-Sep-2009.

Shares in Spanish construction firm, Ferrovial, surged 9.2% in trading yesterday, following a 6% gain in infrastructure firm, Cintra. The two companies are currently in the process of negotiating a merger and will seek shareholder approval in late-Oct-2009. 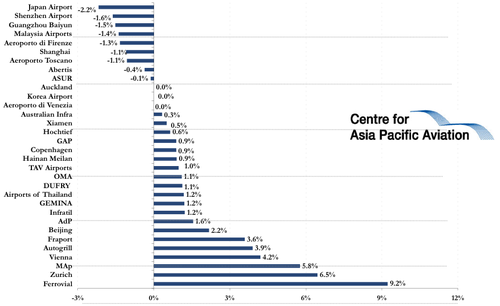