Australia’s MAp Group has released its financial highlights for the 12 months ended 31-Dec-2009. While operating costs reduced 29.3% year-on-year, revenue slumped 75.8% year-on-year to USD1,083 million, due to the "de-consolidation" of Brussels and Copenhagen airports and lack of re-valuation gains, producing a loss before tax of USD672.3 million, compared to a profit of USD1,996 million in the previous corresponding period.

MAp’s core portfolio includes Sydney, Copenhagen and Brussels airports. The airport operator stated 2010 is expected to be a year of continued recovery in the aviation sector, while the company’s long-term growth prospects remain strong.

MAp shares have gained 0.65% in early trade on the ASX today after falling 1.6% yesterday.

MAHB has meanwhile shortlisted five companies to build the main terminal and satellite tower for the new USD588 million low-cost carrier terminal (LCCT) at KLIA, with a decision to be announced soon.

OMA shares up on release of financial report 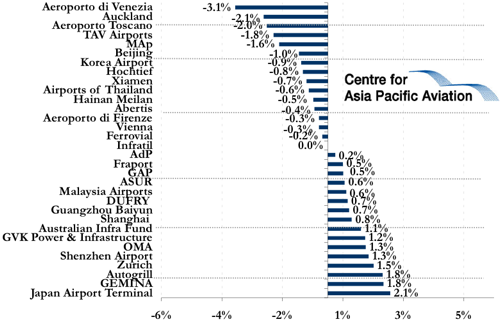