Shares in Macquarie Airports (MAp) surged 6.5% yesterday, upon the release of the fund's traffic report for its investment airports for Dec-2009 and the 12 months ended 31-Dec-2009, which showed market weakness over the full year, but signs of improvement in late 2009.

MAp CEO, Kerrie Mather, stated Sydney, Copenhagen and Brussels reported their strongest traffic results for the year in Dec-2009. Ms Mather added MAp’s portfolio displayed “resilience” in 2009 during a “testing operating environment” for its airports, displaying an improvement in results throughout the year.

Guangzhou Baiyun and Shanghai down, despite encouraging traffic results

Other traffic reports in today’s Airport Business Daily edition include: 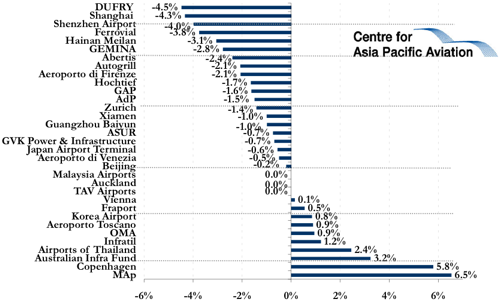