Shares in MAp dipped 0.3% yesterday ahead of the release of its financial and traffic report for Sydney International Airport for the three months ended 31-Mar-2010. Total airport revenue rose 11.7% year-on-year to USD211.6 million, led by a 17.8% surge in aeronautical revenue to USD88.1 million. Revenue from aeronautical security recovery was the only category to decline, down 1.4% year-on-year to USD16.5 million in the quarter.

MAp CEO, Kerrie Mather, stated the result was driven by the strong rebound in traffic. Particularly pleasing was international traffic, up 11.8% on the previous corresponding period, reflecting the increase in demand from both leisure and business passengers.

Shares in the company have declined a further 0.33% in early trade on the ASX today.

Ferrovial (-3.5%) earlier this week announced losses of nearly EUR6 million each day the London airports were closed. Aeroporto di Firenze shed 2.4%. Abertis meanwhile was down 2.1%; its Luton Airport losses from the airspace closure were more than offset by increased usage of its European tollroads. 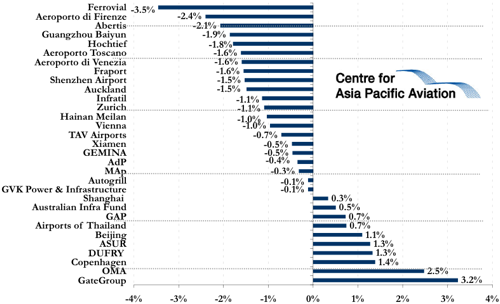