In Southeast Asia yesterday, shares in Malaysia Airports Holdings Bhd (MAHB) gained 0.4%, despite a possible delay on its proposed low-cost carrier terminal (LCCT) at Kuala Lumpur. The terminal is expected to be completed by late 2011 or early 2012, instead of the previously scheduled Sep-2011.

Managing Director, Tan Sri Bashir Ahmad stated so far MAHB has awarded two contracts for earth works to WCT Bhd and Gadang Holdings Bhd, but major contracts had not been awarded yet. Further details on the bidders were not provided.

Earlier this week, Copenhagen Airports (CPH) held the topping-out ceremony for CPH Swift, its new low-cost pier, on 25-Mar-2010. Scheduled to commence operation in six months, the new low-cost concept will “help to attract more passengers to Copenhagen, for the benefit of tourism, business and employment in the city and in the entire region”, according to the airport company. Shares in Copenhagen declined 5.2% yesterday.

Meanwhile in Europe, shares in Switzerland’s gategroup dipped 0.8% yesterday, despite an announcement that its brands in North America have awarded airline contracts totaling nearly CHF200 million (EUR141 million) over the three to five-year terms of the agreements, equally spread across new and existing business. The agreements cover a mix of US and international carriers and include gategroup brands Gate Gourmet, Pourshins, Supplair, deSter, eGate Solutions and Gate Safe. Details include: 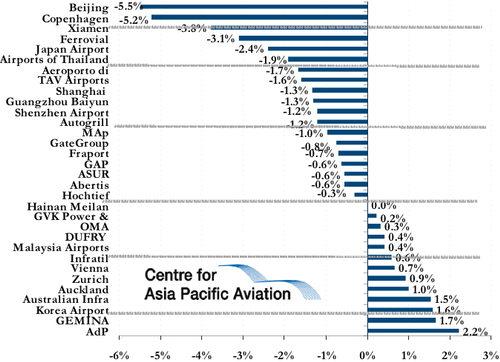