Malaysia Airlines’ shares rose 1% yesterday as several analysts upgraded their outlook for the stock on expectations of rising demand.

AmResearch estimates passenger traffic at Kuala Lumpur Airport will grow by at least 5% in 2010 and revised its 2010 net profit estimate for Malaysia Airlines to a profit of MYR354 million from a loss of MYR267 million previously.

Rival Thai Airways’ shares dropped 5.8% yesterday, giving up some recent solid gains following the appointment of the airline’s new President, Piyasvasti Amranand. Mr Piyasvasti has outlined a four-year strategic plan for the carrier and pledged to improve the carrier’s position over the next two years. He recently told the Bangkok Post, “the next two years will be for rehabilitating the airline, and the following two years for gearing up to become a top-three carrier in Asia and a top-five airline in the world… We are not starting from scratch, but building on the foundation already there”.

Air New Zealand’s shares gained 2.3% yesterday, as the carrier outlined plans to offer Economy passengers an option to book an extra seat next to them, if space is available when they check-in, for approximately USD100.

In a world first, according to the Sydney Morning Herald, the seat arrangement would involve both seats sliding forward with the seat rest raising up, allowing passengers to spread out across both seats. The arrangements could reportedly be available on its fleet of B777-300ERs delivering from the end of next year. 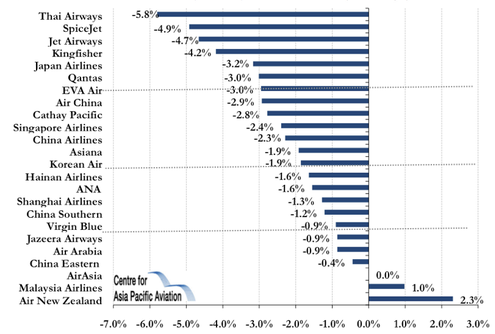