Malaysia Airlines’ Senior GM Network and Revenue Management, Ain Khan, in an interview with Bloomberg, confirmed the carrier is considering introducing Premium Economy seating in its six on-order A380s, commenting that it would "provide another option for our passengers".

He added that the seating would meet the needs of "those organisations that maintain economy-class travel policy for their employees, even after the recession." According to Mr Khan, the carrier’s passenger yields are not expected to return to pre-crisis levels "just yet", even though business demand is showing signs of recovery. Shares in the carrier surged 6.7% yesterday.

Also in Malaysia, shares in AirAsia were up 0.7% yesterday, despite OSK Research continuing to caution regarding AirAsia’s balance sheet profile, which it sees as a "concern, especially considering the number of planned new aircraft deliveries". OSK Research commented, "the huge amounts owed by its Thailand and Indonesia operations together with its significant unrecognised share of operating loss also worry us”.

Tiger Airways CEO, Tony Davis, in an interview with The Financial Times, confirmed that the carrier is planning to establish a third Asian subsidiary, commenting, “we are now actively looking at that opportunity. The timing is as soon as we can come up with an opportunity that we like, [and] do a deal with a partner that we can work with.”

Mr Davis, while not commenting on a possible location for the subsidiary, stated it would be in a country where regulations would require Tiger to set up a JV with a local partner. Tiger's shares eased 1.3% yesterday. See related report: Tiger Airways profitable in Dec-2009 quarter, as unit revenues and passenger grow. Third "cub" soon? 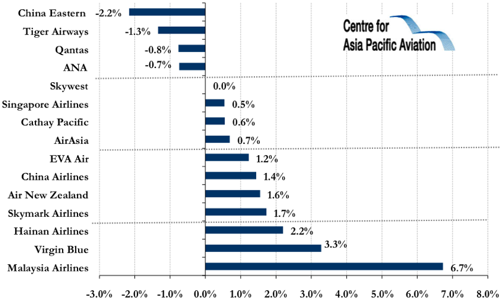 *It was a public holiday in South Korea, Thailand and India on 01-Mar-2010