Stronger demand and rising load factors should deliver an earnings turnaround for Malaysia Airlines (MAS) in 2010, although the outlook is not without risks. The Group recorded an operating profit of RM289.5 million in 1Q2010 ended 31-Mar-2010, "mainly due to the increase in other operating income as a result of A380 compensation, as well as improvement in passenger and cargo traffic demand". 'Other operating income' surged MYR354 million (USD110 million) from the same period last year, reflecting the A380 compensation. Without it, MAS would have been in the red again, as its expenses exceeded revenues by around MYR100,000 (USD32,000). 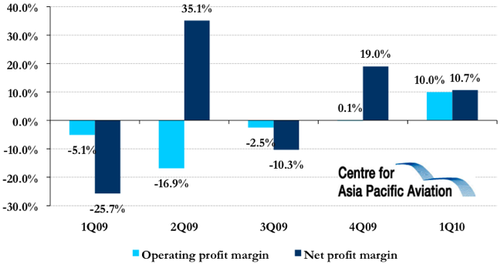 Revenue increased by 21% to RM3.3 billion “on the back of the economic recovery”, which boosted the airline’s traffic by 29%. MASkargo's freight traffic saw an upswing of 31%, leading to a 53% increase in revenue to RM456 million from RM298 million in 1Q2009. The international passenger market performed well for MAS, as it held capacity down by 5.1% but experienced a 29% surge in RPKs. 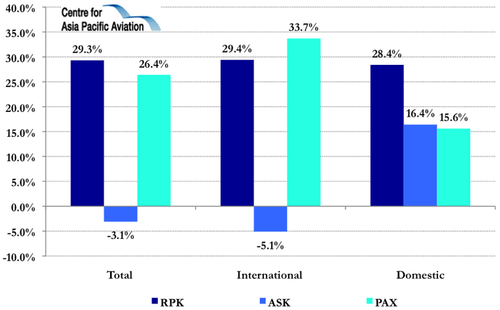 As a result, international load factors soared, pushing systemwide load factors up by almost 20 ppts to around 75%. 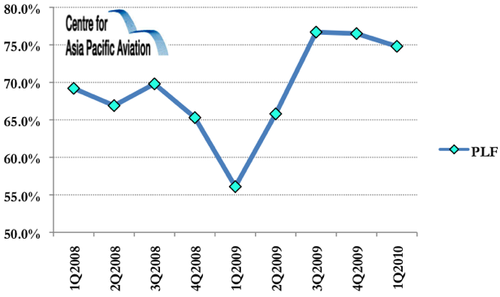 MAS encouraged by first quarter, but fuel volatility of concern

Azmil added, “we are also delighted to see the revival of the front end traffic with the return of business class passengers. We will continue to work on improving our yield”. See related report: Worldwide premium air traffic recovering, but still 15% below pre-recession levels

Azmil remained optimistic about MAS' growth prospects, stating “we have completed our rights issue and are in a stronger position, with close to MYR3.2 billion in cash and negotiable instruments of deposit. Our shareholders' equity is also strong at MYR3.7 billion. Forward bookings are positive. We are working closely with the travel trade and pushing sales through our website to capitalise on the increase in demand. We are seeing robust growth for our online bookings. MASkargo is also powering ahead to capitalise on the strong global demand especially in China”.

The airline will start receiving its new fleet of B737-800s in Oct-2010 and will add three leased B737-800s this year to “add capacity to key destinations and meet the demand in customer uptake”.

But volatile fuel prices and the global economic recovery (particularly China’s performance) loom as the major challenges for MAS in the achievement of its targets.

MAS noted that the first quarter performance was impacted by the fuel price, “which has increased in tandem with the economic recovery”. Fuel prices are now deflating rapidly as concerns grow about European sovereign debt and China’s property bubble. But MAS has largely locked in higher prices and is 60% hedged at USD100/bbl for 2010 and 40% hedged at USD100/bbl for 2011.

Azmil concluded, "We are well positioned to capitalise on the economic recovery. Barring the high fuel prices, we are optimistic of a better year in 2010."