Shares in Malaysia Airlines soared 12.1% yesterday, after analysts upgraded the carrier on increased optimism of the carrier’s outlook, following the carrier’s return to black in 4Q2009.

OSK Research stated it was upbeat regarding MAS' long-term prospects, due to the carrier’s plans to improve its balance sheet through a rights issue, and on opportunities for yield and load factor improvements in 2010. The carrier’s fleet renewal programme will also enable the carrier to lower its operating costs.

On a more cautious note, OSK warned that the business environment in the short to medium term remains fragile, commenting, "as collective re-commissioning of this capacity too quickly or too many at the same time will cause excess supply, this may trigger another round of airfare price war”. OSK added, “a sharp turnaround of the cargo unit may also be tentative as this was partly due to the delivery rush during the Christmas season and excess freighter capacity worldwide".

AmResearch reaffirmed its contrarian ‘buy’ rating on MAS, but lowered its fair value from MYR3.90/share to MYR3.50 per share, after factoring in dilution from MAS’ one-for-one rights issue. Similarly, Hwang DBS Vickers Research (HDBSVR) upgraded MAS to ‘hold’ with a target price of MYR1.90 (up from MYR1.70), adding that it is optimistic about the longer term outlook for MAS.However, HDBSVR added that FY2010 will continue to remain challenges, with yield pressures to continue.

Kingfisher Airlines announced it intends to join the oneworld alliance in 2H2011, subject to government approvals. Kingfisher Airlines’ addition to oneworld will result in the addition of 58 Indian cities to the oneworld network. Kingfisher stated it expects international operations to turn profitable in 2010, with Chairman, Vijay Mallya, commenting, “international is still losing and it is not unexpected because it takes time to build international routes in face of foreign competition. It takes a bit of time. During the course of the year, we should turn that profitable”.

In the Australian market, airline stocks lost altitude, with Qantas shares down 2.6%, to a two-month low of AUD2.65, and Virgin Blue slipping 3.9% to AUD0.62. In neighbouring New Zealand, shares in Air New Zealand were up 0.8% ahead of today's release of Jan-2010 traffic results. 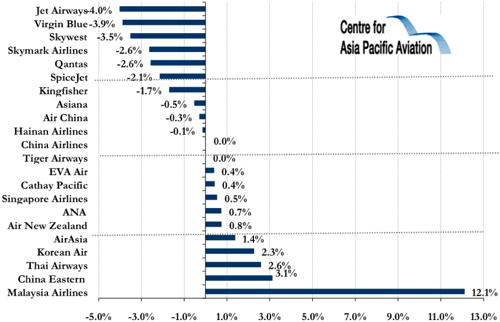 NB: China Southern Airlines Company Limited shares were suspended with effect from 23-Feb-2010, pending the release of an announcement which is of price-sensitive in nature