Malaysia Airlines’ (MAS) Managing Director, Idris Jala, stated on Friday that the airline plans to reduce costs by up to MYR1 billion (USD281 million) this year. Despite acknowledging the challenges facing the global aviation sector, Idris Jala expressed optimism regarding his carrier’s survival chances, stating, “I believe that as a company, we will be able to pull through these difficult times”.

China Eastern's shares continued their recent ascent, although shares in merger partner, Shanghai Airlines, slipped 1.1%, after the carriers warned investors on the potential risks of volatile share trading. The carriers also stated that they have no plans to release any further information on their proposed merger this month. 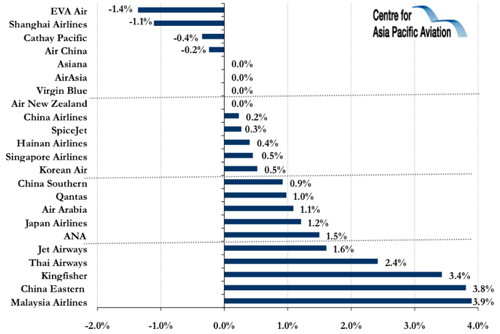