Vueling’s shares slipped 4.2% yesterday, as the carrier stated that Inversores Hemisferio (the Lara family) sold its 14.3% stake in the LCC.

The shares were placed at EUR11/share for a total of EUR47.1 million through an accelerated bookbuilding process with institutional investors.

The carrier also reported its 2Q2009 financial results yesterday. Vueling stated it expects demand to remain relatively stable in 4Q2009, after reporting a 175% jump in operating profit in 3Q2009 (and a 10.2 ppt EBIT margin improvement to 26.3%), due to its merger with Iberia’s LCC subsidiary, Clickair, in Jul-2009.

The combined carriers reported an operating profit of EUR68.1 million in the quarter, as revenues gained 69% to EUR259.2 million. The carrier added that it “expects to report even better results in 2010 than in 2009,” noting that more than 60% of the merger synergies will be experienced in 2010.

Also in Europe, Air Berlin’s shares were down 3.7% yesterday, with Ryanair and easyJet’s stock dropping 1.9% and 1.3%, respectively.

Elsewhere, AirAsia’s shares were up 0.7%, while in the US, Southwest’s shares slipped 1.7%. 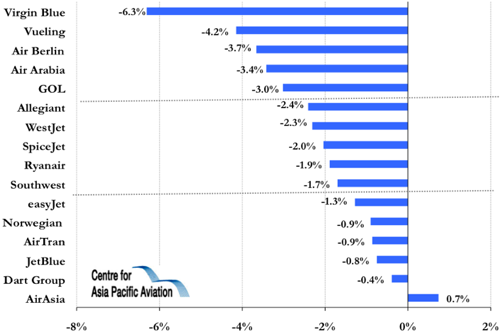