Major milestones passed for SES, but not everyone is cheering

Early Dec-2010 has marked a number of major milestones passed for the second phase of the Single European Sky programme. The most important of these is the setting of pan-European performance targets for air navigation service providers (ANSPs). The targets cover four major – and interrelated - areas: safety, capacity/delays, the environment and cost efficiency.

Under the SES II legislation package, EU-wide performance targets are to adopted by the commission at least 12 months prior to the start of the first performance reference period.

In addition to the adoption of the performance targets, a treaty has been signed establishing the functional airspace block (FAB) for Belgium, France, Germany, Luxembourg, the Netherlands and Switzerland (FAB Europe-Central or FABEC). The FABs form the backbone of the SES scheme by eliminating national boundaries in the control of airspace. The FABEC covers some of the most congested and complex airspace in Europe, and capacity and delay performance in the region has important flow-on effects for the rest of European airspace.

The performance agreement comes just two months after the European Commission VP for Transport, Siim Kallas, disappointingly withdraw a set of environment, capacity and cost-efficiency goals for European ANSPs, in the face of opposition from EU Member States. At the time, Mr Kallas warned that the whole SES programme was “at risk”.

Europe’s Single Sky Committee (SSC) voted against the scheme outlined by the Performance Review Commission, with some major European states refusing to support the targets. The objections were not centred over the actual targets themselves, but reportedly due to concerns that implementation of the more ambitious targets would result in major job cuts and labour unrest at ANSPs. Workers groups, such as the European Transport Workers’ Federation, had already come out against the ATM performance targets.

Labour relations at European ANSPs, particularly with air traffic controllers, have been particularly fraught in some quarters, a situation that has not been helped by Europe’s general economic situation and the cost-cutting initiatives of many ANSPs. Over the past 12 months, major strikes have held in Ireland, Spain, France and Greece, while planned industrial action has been averted in Germany due to court intervention.

CANSO has also been vigorous in its objection to the performance scheme, describing the objectives for 2011-2014 as “unrealistic”.

On the other side of the SES argument, airlines have been lobbying for EU states to get the programme back into motion, after the worrying stall in Oct-2010. In a joint letter written in Nov-2010, the heads of six major European industry associations asked all EU Member States to endorse the thrust of the recent "Bruges Declaration".

In the letter, the representatives stressed coordinated action under the leadership of the EU Council, in cooperation with the European aviation sector and the Commission, is needed to implement urgently the Single European Sky. In addition, they called for Europe to establish public funding mechanisms for the SESAR project and avoid further burdensome regulations and taxation. They urged the recent Transport Council meeting to take a “decisive step forwards” to SES, improving the management of European airspace, as well as reducing airlines’ carbon footprint and costly delays.

Performance targets set for the next stage of SES

European member states formally agreed to the performance targets for the Single European for the 2012-2014 period on 03-Dec-2010. They signed off on a package of environment, capacity/delay and cost-efficiency guidelines for the period, presented by the European Commission on recommendations from the

Overall, the European Commission expects the package to deliver savings of more than EUR1 billion to airspace users over the period. Mr Kallas described the package as a “very significant step forwards” and “ambitious but achievable”.

The agreement mandates EU-wide performance targets, against which Member States are obliged to establish their own performance plans at national or regional level. Under the new performance targets, the determined unit rate will decrease from EUR59.29 per service unit in 2011 to EUR53.93 euro per service unit in 2014. The EC estimates this represents a real saving of EUR340 million p/a for airspace users over the period until 2014.

Capacity targets have been established aimed at reducing the average en route Air Traffic Flow Management (ATFM) delay to a maximum of half a minute per flight in 2014. Meeting capacity/delay targets will result in estimated savings of some EUR250 million p/a.

New environmental targets are calculated to result in savings of 500,000 tons of CO2 and 150,000 tons of fuel p/a and EUR200 million in cost savings through lower fuel burn and flight time. The performance scheme has set a target of a 0.75% point improvement in the average horizontal en-route flight efficiency indicator in 2014,as compared to the situation in 2009.

Key to this is the establishment of the position of the European network manager, which will be designated by the European Commission early in 2011. The network manager will have the responsibility of putting in place straighter and shorter routes and ensuring more efficient use of European airspace. Europe has the aim of ensuring carbon-neutral air traffic growth, a goal that will be vital for airlines in the region, with aviation set to join the European Emissions Trading Scheme.

Even with the achievement of two major milestones in SES progress, IATA is less than pleased with the progress and the targets that Europe has set for its unified ATM system. According to IATA Director General and CEO, Giovanni Bisignani,  the 3.5% cost reduction target is a “major disappointment” for Europe’s airlines. Targets need to “drive change, not support the status quo”.

In its quest for reduced costs for the airline industry, IATA has been avidly pressing for European ANSPs to bring down their costs. The body has lumped ANSPs in with other monopoly providers in the airline cost-chain, putting the ANSPs of Denmark, the  Netherlands and Poland on its "Wall of Shame” in 2009, for “proposing charges increases between 27% and 32%”.

The 3.5% performance target is a “license for them [ANSPs] to continue with business as usual over the next three years” and is “not a serious challenge to ANSPs to reduce costs”. According to IATA, ANSPs can meet the 3.5% cost reduction target “simply by containing their costs”, given the forecasts of 2.7% traffic growth and inflation of 1.9% over the 2012-14 period.

AEA cautious in its assessment

In contrast to IATA, the Association of European Airlines has been welcoming of the agreement, labelling it as a small, but important step in the right direction. AEA has hailed the agreement as the first time that European ANSPs will be subject to budgetary discipline.

In Oct-2010, AEA Secretary General, Ulrich Schulte-Strathaus, argued that the absence of full implementation of SES was “anti-European, anti-consumer and anti-environment”. The AEA estimated that Europe’s ATM system was costing its members an extra EUR3.3 billion a year in costs.

The European Commission has also touted the agreement between Belgium, France, Germany, Luxembourg, the Netherlands and Switzerland to create FAB Europe-Central as a key step in the implementation of SES. The countries have agreed on harmonisation of rules and procedures, provision of air navigation services, civil-military cooperation, charging, supervision, performance and governance. 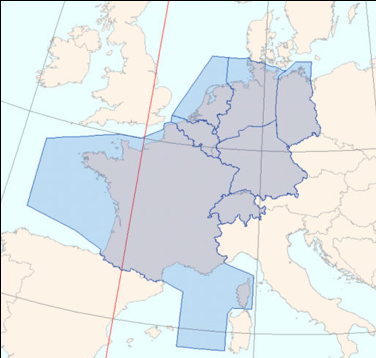 The FAB agreement creates a framework under which the states will ensure air traffic management and the provision of air navigation services, in the broader context of the SES implementation. FABEC, which will handle about %of all flights in Europe and covers the most complex traffic areas between the busiest airports.

A full agreement expected to be ratified by 2012. A 2008 cost-benefit analysis demonstrated a potential benefit (net present value) of EUR7000 million for airspace users by 2025. In Jul-2010 the FABEC states launched studies on the future institutional set up and governance of air navigation services provision

Political will the deciding factor

Europe’s ATM system is massively fragmented, and not just due to the existence of national boundaries. There are 36 ANSPs in Europe, but just five ANSPs (Aena, DSNA, NATS, DFS and ENAV) account for 60% of total European ATM/CNS provision costs. 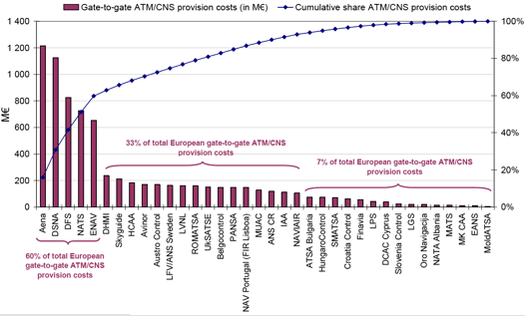 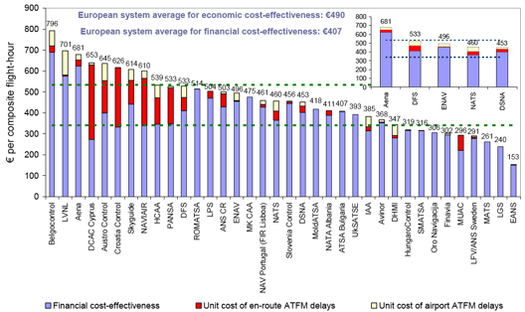 Across the five largest ANSPs, there is still a 50% difference in costs (EUR681 for AENA, compared with EUR453 for DSNA).

Those underperforming ANSPs will now need to begin a painful process of closing the gap to their more efficient counterparts. How painful this will be will depend on how national bodies set targets for their ANSPs and how service providers go about achieving them.

According to the AEA: “The challenge ahead is that member states define consistent national targets with the EU-wide performance targets.” Political will is the key here; some European Governments will need to bite the bullet and take the knife to their overstaffed and inefficient ANSPs, otherwise they will find themselves out of step with the rest of Europe and their ANSPs punished with economic handicaps. More opposition from ANSPs and labour groups is certain. Strong leadership will be necessary over the 2012-2014 period to ensure that even the revised targets are met.

Even this may not be enough to satisfy the demands of airlines. According to IATA, ATM in Europe is an “uncompetitive mess”. Introducing performance targets or restructuring ANSPs and their administration “will not deliver meaningful results without challenging targets”. IATA wants the EUR5 billion “competitive disadvantage” of European ATM to be eliminated, believes that to affect real change and achieve the full SES implementation by 2020, Europe will need much tougher targets in the next reference period.

This will be the first reference period for which performance targets are set under the Single European Sky. Whether European States can ensure that their ANSPs hit the somewhat modest target, even with the burden of the last few years to still be shouldered, will reveal much about the chances that SES has of success by 2020.