Macquarie Group announced that it will relinquish control of Macquarie Airports (MAp), with the fund to internalise its management and cease the payment of much-maligned fees to Macquarie. MAp stated it has acted to "reduce the gap between MAp’s share price and the value of the airports it manages". In anticipation of the move, MAp's shares soared 10.5% yesterday, before a trading halt was put in place on both MAp and Macquarie Group shares. MAp shares have drifted lower in early trading this morning.

Under the deal, Macquarie will receive 150 million MAp shares at AUD2.30 per share, increasing its ownership from 21.2% to 27.3%. Kerry Mather will continue as CEO at MAp, and will join the airport manager's board. Most of the MAp management team, currently employed by Macquarie, are also expected to transfer to MAp.

Macquarie and MAp have also agreed to a 12-month transitional services agreement, to help MAp transition to a stand-alone company. MAp’s management fees to Macquarie averaged AUD44.1 million p/a, as well as AUD255.5 million in performance fees over a six and a half year period, which have weighed on the fund's earnings - and investor sentiment.

MAp reaffirmed its intention to pay a dividend of AUD0.21 per share for 2009, with AUD0.13 having already been declared as an interim distribution.

Piggybacking on the MAp gain, Australian Infrastructure fund rose 7.8% in trading yesterday. ASUR was up 4.9%.

The MAp announcement has overshadowed Sydney Airport's financial results announcement for the three months ended 30-Jun-2009. The result was solid, if unspectacular: 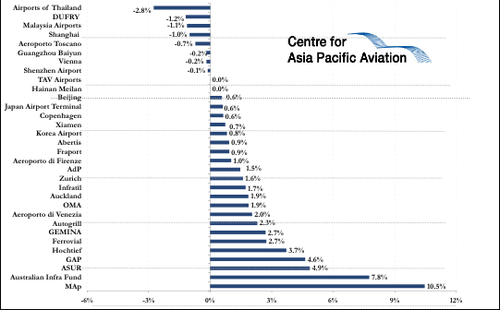