Macquarie Airports (MAp) has unveiled considerable weakness across its slimmed-down portfolio of European airports, although there are some glimmers in the gloom. EBITDA (before specific items) at Brussels, Copenhagen and Bristol airports were all down by 20-30% in the three months ended 31-Mar-2009, though the retailing performance at each of the airports has defied the traffic downturn.

MAp noted the seasonally weak first quarter was a “challenging period” for all European airports.

Capacity lost at Copenhagen Airport when Sterling Airways collapsed last year has now been fully replaced, according to MAp. The airport also received regulatory approval to raise its aeronautical charges by 4.2% from 01-Apr-09. Retail revenues rose 9.9% year-on-year in the first quarter.

Brussels Airport experienced a 16.2% decline in passenger numbers in the first quarter, which was “primarily driven by reductions in charter traffic and intra-EU short haul capacity”. MAp noted that LCC traffic declined only marginally and the Summer schedule incorporated a moderation in Winter capacity reductions. Aeronautical charges increased by 5.1% on 01-Apr-2009, while non-aeronautical revenues are down by only 0.7% year-on-year. Furthermore, retail revenue per passenger is up almost 17% year-on-year.

Bristol Airport, which MAp is rumoured to be selling, reported a 21.5% slump in first quarter traffic, primarily due to easyJet’s and ThomsonFly’s planned Winter capacity cuts and the bankruptcy of XL Airways. The Summer schedule reflects “increased capacity, due to additional easyJet frequencies, the two additional Ryanair aircraft and a new charter operator, Kiss, commencing operations from July-2009”. Non-aeronautical revenue declined by 15.8%, but retail and catering revenues increased by 7.8% on a per passenger basis in the first quarter.

Sydney Airport went against the trend, reporting a 2.2% increase in first quarter EBITDA and continues to attract a range of new air services, despite softening economic conditions. MAp noted V Australia and Air Austral have recently commenced services, while Qatar Airways, Delta Air Lines and Tiger Airways have all announced new services. The company noted Sydney’s retail performance has been “solid”, with revenues flat against lower passenger volumes. Spend per passenger is up 4% year-on-year.

MAp’s shares eased 1.1% yesterday, but regained that loss on the opening bell in Sydney this morning.

Elsewhere, European airport stocks rebounded after two days of moderate losses. Aeroports de Paris gained 5.7%, while Fraport and Vienna Airport rose 5.2% and 4%, respectively. Autogrill may have been oversold earlier in the week, with its shares rising 5.2% yesterday. 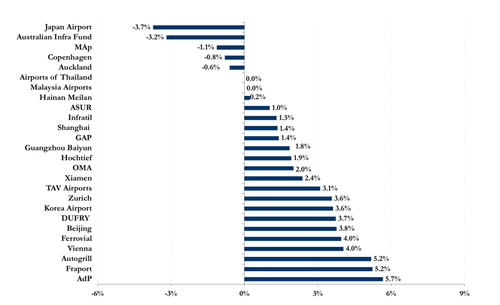