Airport shares worldwide were generally higher in trading yesterday, led by Korea Airport Corporation and Airports of Thailand, which jumped 4.4% and 4.0%, respectively.

Airports of Thailand’s shares continued to rise, after gaining 1.2% in the previous day trading, after announcing plans to expedite expansion plans at Phuket International Airport to cater for increasing traffic at the airport. The airport’s development project is expected to be completed in 2013 and will include construction of a new international passenger terminal with capacity for 12.5 million passengers p/a, a cargo terminal and a new car park.

In Europe, shares were generally mixed, with Aeroports de Paris rising 3.1% (with AirAsia X announcing a new service to Paris Orly), while Vienna Airport and Copenhagen Airport fell 0.9% and 0.7%, respectively. 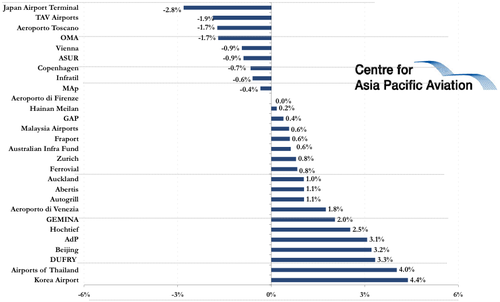