Macquarie Airports’ shares continued to rise, gaining 3.0% in trading yesterday, as the battle over its management rights rages on.

Newly founded Global Airports (Gap) has urged MAp to delay its vote on 30-Sep-2009 to a later date to give its shareholders time to consider its alternative proposal for MAp’s management rights. MAp earlier rejected GAp’s proposal, stating it risks breaching the bank change of control clauses, and sentiment does appear to be building around the MAp proposal.

In Europe, shares in Germany’s largest construction company, Hochtief, bounced back (+1.6%) following reports the company is preparing an IPO launch in Germany of its airports division as early as the end of 2009. Hochtief has stakes in airports in Athens, Hamburg and Sydney.

Shares in China’s airports were weaker, despite the National Tourism Administration forecasting the largest National Day Holiday in the country’s history, with an estimated 200 million people expected to travel during the eight-day holiday period, an increase of 13% year-on-year. Shenzhen Airport led the decline, closing 2.2% lower yesterday. 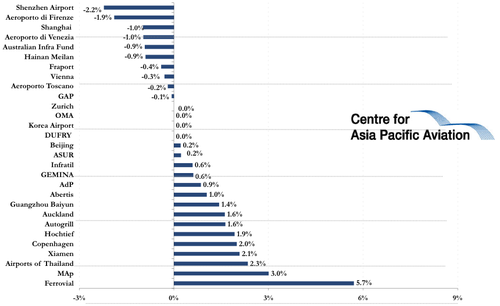