Lufthansa has succinctly summarised the challenges facing the airline industry at its recent Investor Day event (see below). The carrier noted the financial crisis and its repercussions “pose major challenges for airlines worldwide". It added, "Lufthansa is also impacted by the persistently weak demand development in both the passenger and freight businesses, structural changes in passengers' travel behaviour and rising fuel prices”.

The structural changes include a flight to budget travel amid the economic downturn. In its May-2009 traffic report released last week, IATA noted European carriers “saw some loss of market share to European low cost carriers, whose traffic grew by 2.1%, while the network carriers reported a 9.4% decline”.

British Airways swam against the tide, rising 2.1% as it announced 6,940 staff have applied for voluntary pay cuts in support of the airline's cost reduction programme, including unpaid leave, part-time work or unpaid work. 800 of these staff have volunteered to work unpaid for up to four weeks. 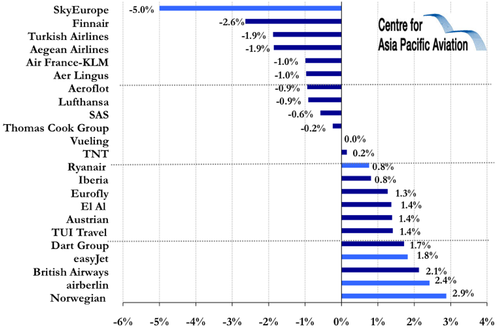 The financial crisis and its repercussions pose major challenges for airlines worldwide. Lufthansa is also impacted by the persistently weak demand development in both the passenger and freight businesses, structural changes in passengers' travel behaviour and rising fuel prices. As a result all business segments enforce their measures already being undertaken to safeguard earnings. The core business Lufthansa Passenger Airlines, too, has announced the implementation of a new profit saving programme. Details are to be presented with the publication of the Group’s first half year results on 30-Jul-2009.

Lufthansa noted that, as a result of its large degree of operational and financial flexibility, it can better cope with the current crises than many of its competitors. Other business segments, such as Lufthansa Technik, add to the financial outperformance of the Group with its "high profit stability".

Management underlined its belief in the medium-term growth perspectives for the airline industry and reiterated its ambitions to participate in and benefit from them. Consequently, the measures "not only aim at avoiding an operating loss in the current fiscal year, but also to sustainably increase the earnings power in the following years".