European markets pushed airline shares lower again on Wednesday (05-May-2010) as the banking sector continued to stumble on a warning from Moody’s that it may downgrade Portugal. The move again raised concerns of the financial health of euro zone countries and the region’s economic recovery.

Lufthansa’s (-2.0%) fall was minimised, after CFO, Stephan Gemkow stated the carrier is generally satisfied with the development of passenger yields in 2010, with the carrier stating there was not a further substantial reduction of yields in 1Q2010, following severe reductions in light of low demand during the economic downturn in 2009.

Mr Gemkow added that the improvement of passenger yields is considerably more robust on long-haul routes compared with the European and domestic short-haul business. The carrier added that it has witnessed a "distinct improvement in demand", primarily in the cargo business.

The carrier confirmed during trading that is reported an operating loss of EUR330 million for the three months ended 31-Mar-2010, compared to a loss of EUR44 million in 1Q2009. The carrier attributed the loss to an extreme winter, as well as the strike and the threat of further industrial action by the pilots’ union, Vereinigung Cockpit.

Turkish Airlines (-1.7%) was also down. VP Middle East Operations, Altan Buyukyilmaz, stated the carrier is "very optimistic" about its prospects for 2010, adding, "we've shown amazing strength in recent years and this is only getting better". Mr Buyukyilmaz stated one third of the airline's passengers transit through its hub in Istanbul, adding that it hopes to increase this number to two thirds in the near future. Mr Buyukyilmaz added that the airline has USD1.5 billion in cash and is using the funds to upgrade its existing fleet and purchase new aircraft. During 2010, Turkish Airlines will add 12 new destinations, including Shiraz, Los Angeles, Ho Chi Minh City, Washington DC and Basra, with Mr Buyukyilmaz describing the carrier as "one of the few airlines growing organically" at present.

Aegean Airlines (-1.7%) and Dart Group were the only carriers not to witness a decline in share price on Wednesday, with Dart Group ending trading flat. Aegean gained on news of improved traffic at Athens International Airport for 1Q2010, despite the Athens Stock Exchange falling 3.9%. 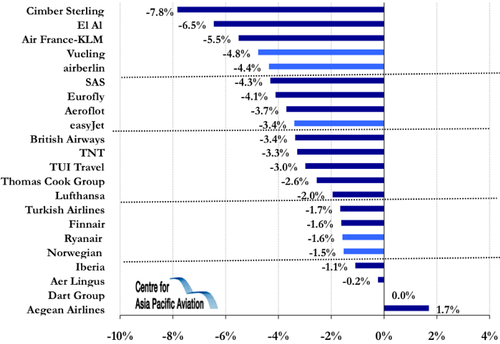