Lufthansa reported a preliminary revenue increase of 22.4% year-on-year to EUR27,300 million and a 574% surge in operating profit to EUR876 million in 2010. The carrier also returned to a net profit at EUR1100 million, compared with a loss of EUR34 million in 2009. Shares in the carrier were up 2.7% in trading on Wednesday. Lufthansa is scheduled to release its full annual report on 17-Mar-2011.

Shares in Aer Lingus rose 7.1% yesterday. The carrier reported earlier this week that its passenger numbers fell 13.6% in February to 574,000, affected by its industrial dispute with the Impact cabin crew union, as well as planned capacity reductions at London Gatwick and Cork. Aer Lingus shares are down 22% for the year-to-date.

Aeroflot and Boeing announced  an order for six B777-300ERs and two B777-200ERs. First deliveries are expected in 2013. The order is reportedly part of Aeroflot's longer term plans to acquire 16 new B777s over the next six years. Aeroflot already had outstanding orders for 22 B787s. 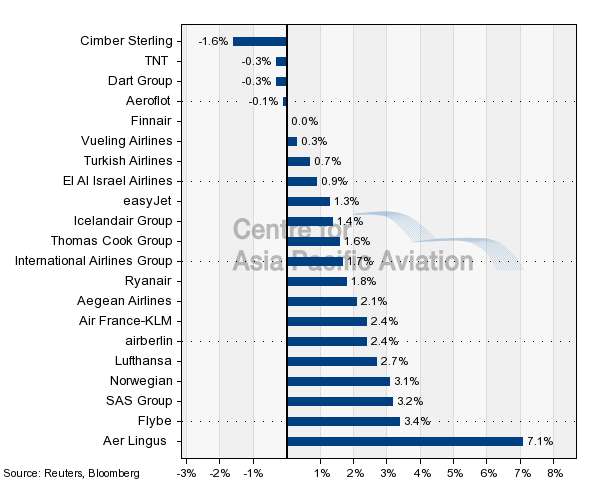