European shares climbed for the third consecutive day on Tuesday (02-Mar-2010), reaching a near six-week high. Banking and auto maker shares were the biggest gainers, ahead of the release of new austerity measures by Greece to handle its debt issues. As a result, the majority of European carriers’ shares rose again.

DZ Bank analyst, Robert Czerwensky, stated the carrier’s result, despite a weak operating environment, was a sign of an improving market.

airBerlin (-0.8%) slipped after The Cockpit Union stated it plans to stage three-hour walkouts at the carrier and its LTU subsidiary "in the coming days", in a dispute over working conditions. Cockpit stated it is seeking a medium-term harmonisation of conditions at Air Berlin with what it says are better conditions at the long-haul unit, LTU.

British Airways surged 6.2% to its highest level since Nov-2009 and was the UK FTSE’s biggest gainer.

For more of the latest on the European aviation industry, why not subscribe to Europe Airline Daily? Other stories in today’s issue include: 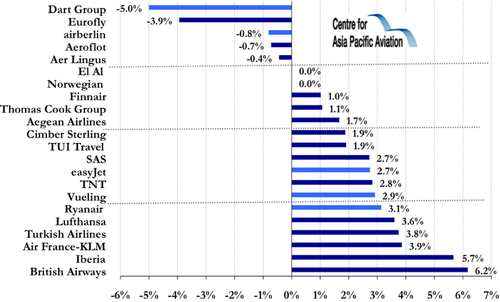