Lufthansa was one of the day’s biggest gainers on Wednesday (27-Oct-2010) after the group announced it registered a 24.9% year-on-year increase in revenue to EUR20,200 million and an improvement in operating profit of EUR612 million in the nine months ended 30-Sep-2010.

Lufthansa's Executive Board also revised its expectations for the earnings development upwards and now anticipates that the operating result for the full year will exceed the EUR800 million mark, in view of the course of business to date and current stable demand. The carrier is scheduled to release its full 3Q2010 results on 28-Oct-2010.

Air France-KLM (+2.0%) also gained following its upward revision of its operating result expectations for the 12 months ending 31-Mar-2011 the day prior.

The carrier stated it now expects EBIT of EUR60 million-70 million for the full year. Cost per ASK, excluding fuel, are expected to fall 4.3% for the year to EUR 4.0 cents.

For 2011, the carrier expects “continuous competitive intensity in our markets and fuel cost increases”. In response, Vueling has implemented its 2011 cost reduction programme. 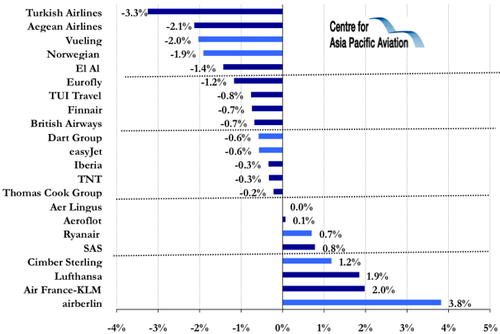