Lufthansa’s shares rose 0.4% to EUR8.97 as the European Commission deferred a decision on the German carrier’s planned takeover of Austrian Airlines. The Commission has launched an in-depth investigation into the planned acquisition citing “serious” competitive concerns. The Commission now has up to 90 days to decide whether to allow or block the deal.

Air France-KLM’s shares gained 1.1%, despite a report in La Tribune citing advance documents that show the airline’s first quarter sales (to 30-Jun-2009) had fallen much more sharply than expected, by nearly 20% year-on-year, with “disappointing” forward bookings through to September. The carrier declined to comment.

British Airways’ shares fell 0.6%, as the carrier failed to attend negotiations with unions after talks ended on 30-Jun-2009 with no agreement. Unions have again threatened to strike, while BA has called for a mediator to be appointed to facilitate talks. 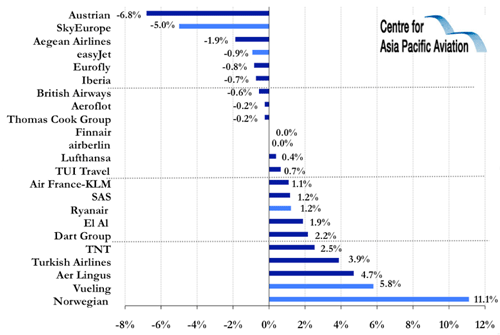