Shares in Lufthansa dropped 5.5%, upon the release of the Group’s preliminary financial results for the nine months ended Sep-2009. The Group’s full results are due to be released today.

Lufthansa reported a preliminary EUR32 million net loss for the nine month period, compared to a net profit of EUR529 million in the previous corresponding period, as revenue declined 13.2% year-on-year to EUR16.2 billion. In the nine months ended Sep-2009, the Group’s operating profit of EUR226 million was down 76.3% year-on-year.

Lufthansa’s operating profit also includes first-time earnings contributions from Austrian Airlines and British Midland totaling EUR28 million and earnings from the reversal of a bad will, as a result of the initial consolidation of Austrian Airlines (EUR61 million).

Lufthansa warned that it could miss its target of making an operating profit in 2009, adding that the “positive outlook for the year remains subject to very considerable risks”.

The German carrier acknowledged that the Group’s “earnings continue to be subject to very considerable risks as a result of volume and price trends and renewed oil price increases. A sharp drop in revenue and continued pressure on earnings is therefore expected for the full year. Negative earnings contributions are also anticipated from the new companies in the airline group over the months ahead. Business performance in the fourth quarter will therefore be a deciding factor in whether these factors can be successfully compensated for and the goal of a positive operating result for the now expanded Group can still be achieved”.

European airlines stocks were down across the board yesterday, as the London FTSE lost 2.32%, the Frankfurt DAX dipped 2.06% and the Paris CAC Index closed 1.98% lower. 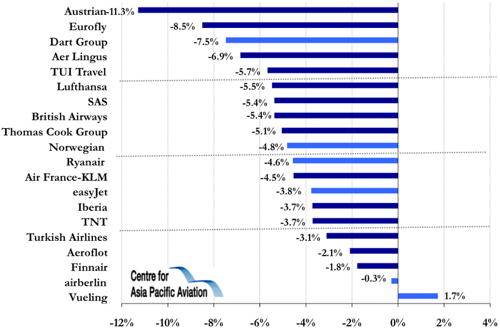