Shares in Lufthansa gained 0.6% yesterday, as the carrier executed the takeover of Austrian Airlines. But the breakthrough not met with jubilation, but some tough talking from the German carrier.

Lufthansa CEO, Wolfgang Mayrhuber, stated Austrian has a “cost problem”, which it will work to set a target for returning the carrier to profitability as soon as possible. Further cost cutting measures will be adopted, but he warned that externalities such as fuel prices and poor overall economic conditions will make it difficult to plan a timetable for the turnaround.

Moody's meanwhile downgraded Lufthansa’s long-term issuer ratings by one step from 'Baa3' to 'Ba1', citing weak market conditions and pressure on yields and volumes and the decline in profit from both cargo and passenger operations. Approximately EUR2.1 billion in debt is affected. Standard & Poor's Ratings Services cut Lufthansa rating from 'BBB' to 'BBB-' last week, stating it expects the carrier’s 2009 operating performance will be “marginally profitable”, at best.

Lufthansa's Chief Officer Group Airlines, Stefan Lauer, forecasts international airline losses for 2009 would exceed the USD9 billion forecast by IATA, as the industry has seen no improvement in conditions, while Lufthansa Cargo reportedly plans to increase its rates by 25% over coming weeks, in an attempt to reverse the “dramatic” recent decline in freight yields. Lufthansa Cargo also made the remarkable claim that if current market trends continue, in the medium term, the majority of the world’s freighter fleet would have to be permanently grounded, due to a lack of economic justification for their continued operation.

Shares in Air France-KLM were down just -0.1% yesterday. The carrier is considering plans to implement a voluntary programme for up to 1,500 job cuts. Air France-KLM has been confirmed as air transport sustainability “Sector Leader” for 2009 and will keep its place in both the Dow Jones DJSI World and DJSI STOXX Sustainability indexes.

British Airways’ shares were 1.4% higher yesterday upon the release of the carrier’s traffic results for Aug-2009. The carrier reported a load factor increase of 1.5 ppts increase compared to the previous corresponding period to 84.7%, as traffic (RPKs) fell just 0.7% year-on-year, on a 2.4% capacity (ASKs) reduction in Aug-2009. 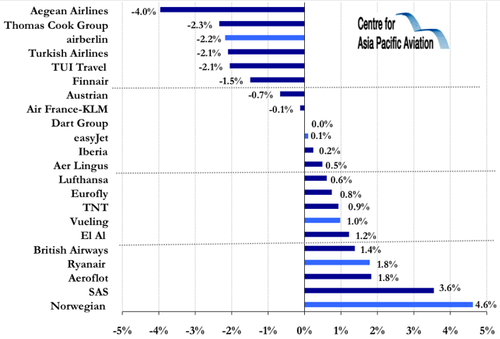 Deutsche Lufthansa AG, Austrian Airlines and Österreichische Industrieholding AG (ÖIAG) executed the successful takeover of Austrian by Lufthansa. All conditions precedent of the transaction have been duly fulfilled. Austrian will therefore become part of the Lufthansa Group as of this month. The European Commission had previously given the green light for the merger of Lufthansa and Austrian, and approved a restructuring aid to be made by ÖIAG in the amount of 500 million euros. Both were granted under conditions that were economically acceptable.

The shareholders of Austrian Airlines, who offered their shares for sale by 11-May-09 and did not exercise the right to withdraw that was granted in the meantime, will today be paid the offer price of EUR4.49 per share. In total, Lufthansa will pay for the 36,959,414 shares a sum of about 166 million euros to the shareholders. Including shares that were previously held by ÖIAG and shares that have already been submitted within the ongoing extension of the additional acceptance period, Lufthansa will hold more than 90 per cent of the shares in Austrian through ÖLH Österreichische Luftverkehrs-Holding-GmbH. ÖLH will prepare to carry out all necessary steps to squeeze out the rest of the minority shareholders.

All shareholders who have not yet accepted the offer may still offer their shares for sale until 09-Sep-09. These shareholders will receive the takeover price no later than on 23-Sep-09.