Lufthansa (+3.2%) rose with the majority of European airline shares on Wednesday (01-Dec-2010), after a positive note from Goldman Sachs. The analysts upgraded Lufthansa from "neutral" to "buy" by during trading. Conversely, Norwegian (+3.0%) and easyJet (+1.5%) were downgraded from "buy" to "neutral" during the day, due to relative upside.

Goldman Sachs stated it expects European carriers to perform well in 2011, due to “strong world GDP growth for the next few years, [and] a better industry structure aligned with tight supply”. The analysts noted European airline stocks look “cheap”. It noted Ryanair (+2.1%) still ranks the highest, “with best-in-class returns thanks to meaningfully lower-than-average unit costs, but without the near-term cyclical kicker”.

Iberia (+0.4%) and Vueling (+0.5%) made only marginal gains for the day, following news Spanish pilot union SEPLA announced plans to launch strike action over Christmas 2010, claiming the Spanish Government has failed to keep its promise for regulations on maximum working hours for pilots. SEPLA demanded an “immediate publication” of the regulations last week, stating the government promised the regulations a year ago. The union represents more than 6000 pilots across the country.

Thomas Cook (-4.5%) shares slumped after reporting a 12.7% year-on-year decline in underlying EBIT for the 12 months ended 30-Sep-2010, to GBP362 million, before all separately disclosed items. Profit before tax was down 7.5% to GBP42 million, on a 4.1% decline in revenue for the period to GBP8890 million. Contributing to the declines, the company incurred GBP53 million in exceptional costs as a result of the volcanic ash disruptions in Apr-2010.

The group stated that as it enters FY2010/11, “although the UK environment remains uncertain, we are encouraged by a better market environment in our major continental Europe and Scandinavian markets”. Winter bookings “have got off to a good start”, while summer bookings are “developing well”.

The group now plans to cut 500 UK jobs. The airline will also renegotiate supplier costs and upgrade IT systems, which the airline expects will save up GBP50 million p/a.

Numis Securities Ltd. lowered its rating for the group from "add" to "hold" as a result. 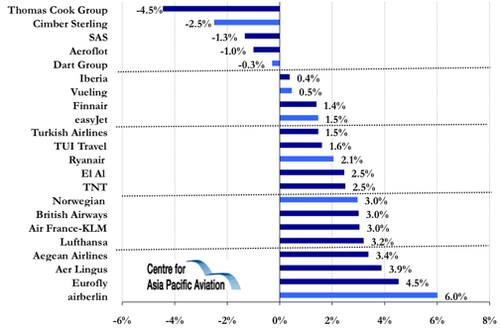